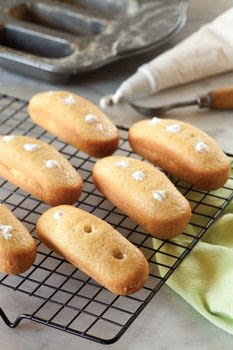 Classic Snacks Made from Scratch
You know I’m a stickler for specific ingredients: buttermilk powder, citric acid, and dark cocoa powder all appear throughout the book. But for this recipe, I’m going to mix things up and suggest a specific pan. For truly authentic Twinkie shapes, a canoe pan will give your cakes the signature rounded edges. If you’re less concerned with a real Twinkie shape, the recipe also works in cupcake pans or mini loaf pans. Me? I use my hot dog bun pan, which makes spot-on split-top buns for homemade lobster rolls . . . but that’s another recipe for another book.