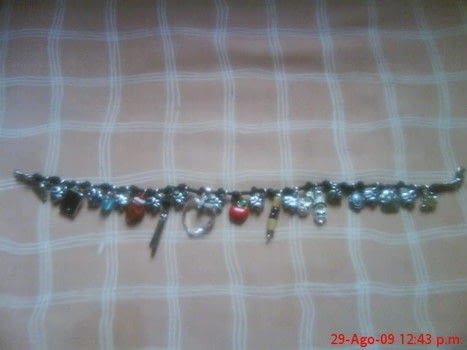 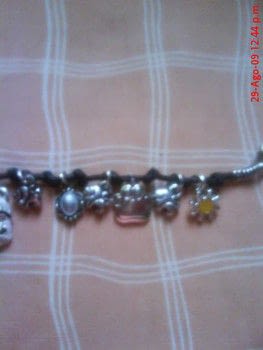 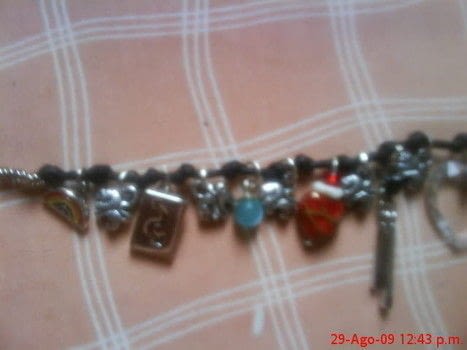 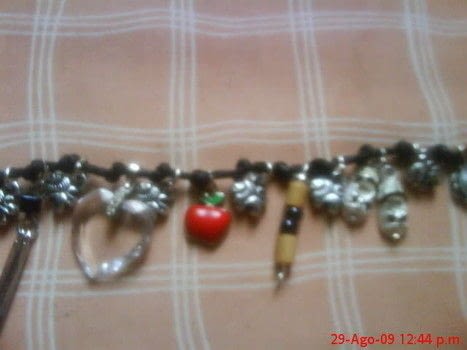 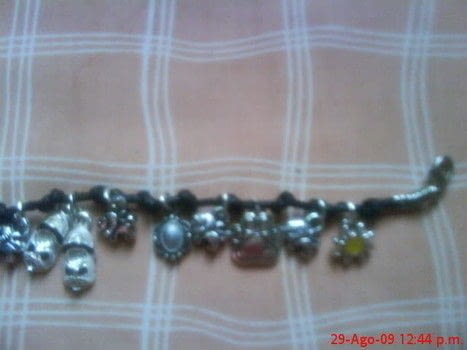 And all started with a claw...
Ok, so I love earrings, but I have bad luck in some senses, for example, loosing one of the pair I really love =<.

So I got a little nostalgic last week and I was thinking what to do with them, because I didn't want to throw them away and I found my claw earring and said, ok, if I had known the Twilight saga before I bought these, I will be more nostalgic than I am now... I that's when I almost heard a click in my head=D.

At first, I was trying to do a necklace, but later on I realized that I was only missing something to represent Nessy to have 12 charms and I noticed it was going to be a complex necklace and probably not as funny as a bracelet.

So I started looking for a Nessy representation and I found those cute tiny shoes at the craft shop for about 40usd cents, and I realized they were the perfect representation for the little nudger who was always kicking her mom.

And whenever you have a nice idea it usually happens that the world seems to agree with you, the girl at the store showed me a container where I found the little lions and I bought like 100 pieces for 1.20 usds... so probably my future projects will include more lions, I was not allowed to buy less than those=S...LOL.

Here is the explanation REMEMBER: I did this with recycled earrings, it's not that I couldn`t get something better for representations, but I wanted to take advantage of the earrings:

Rainbow: The rainbow that sparkles from their skin (almost all of them) with the sun (at the other side of the bracelet)

Blue Crystal: Alice. As Alice can predict the future, I like to think this can represent a Crystal ball.

Stethoscope: Carlisle. Well, with this one I had to use my imagination =S. I pretended to represent that the parts for listening are hanging down. It's not the best charm, but I like it.

The Crystal Heart: Edward. The one he gave Bella as a graduation gift.

Apple: Bella, she will always be the temptation =D

Wood & Black Crystal beads: Jacob. Actually, I did this charm with some beads I had around the house, they represent Bella's point of view of the characteristics she liked the most of him, his wooden smell and his deep black eyes.

Mirror: Rosalie. She loves her own vanity.

Claw: Emmet: The Grizzly bear boy. The strong one.

Sun: It only represents the sun over all of them =D.

Ok, so, hope you liked it (I LOVE IT =D) And I also hope it gives you a nice idea for recycling stuff you have around the house. Sorry if the pictures are not as clear as they should, but I only had my cell phone camara, the other one I was out of batteries.

I actually did 3 hours, but please consider this is my first craft for jewelry, much experienced people can do this type of craft in less time =D. 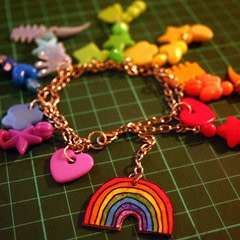 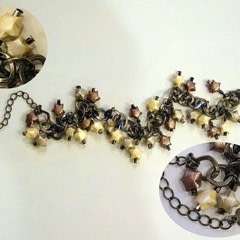 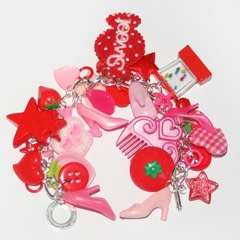 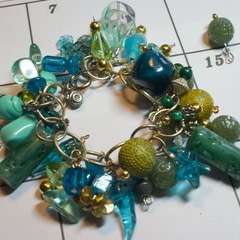 Something To Do While Waiting Bracelet 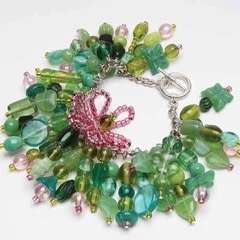 Spring Charm Bracelet
Made this project? Share your version »