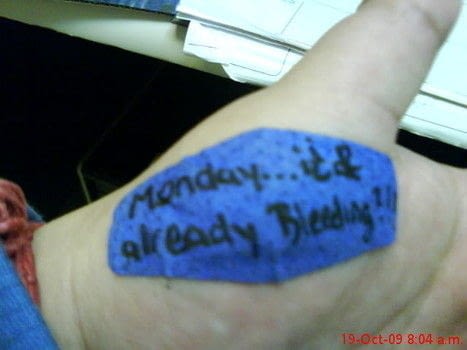 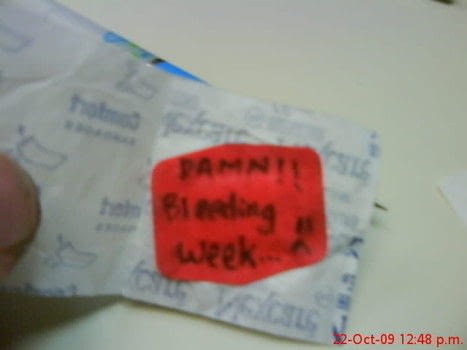 It's one of those days...=S
It was Monday, 5am in the morning... I was dealing with a tag, and I couldn't find my scissors anywhere!! Maybe my boyfriend moved them the night before... so, I took the exact-o knife, I cut the tag thread... along with the palm of my hand!!! GREAT! That's what I call a good morning... but, it was TOO early to start cursing, and I made it fun!! After drenching the cut in alcohol, I placed a bandage over it, took the sharpie, and got inspired... What would Emmet said in such a silly cut like this??? and I made the following quote..."MONDAY...& already bleeding??!!"

Let's say I took it with Phisosophy=D, and my boyfriend laughed so much instead of giving me a lecture, that it worth it=D (NICE!!!)

Later on that same week I got a paper cut with some printed sheets =S... did another one (showed in the second pic =D)it says "DAMN!! Bleeding week...=<"