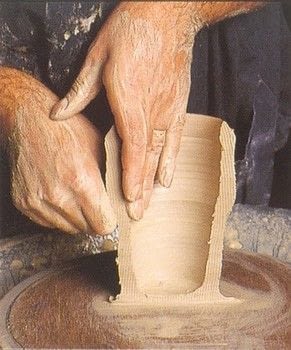 The Encyclopedia of Pottery Techniques
Throwing
Hand-forming a mass of soft plastic clay on a rotating wheel head is called throwing, and the technique can be traced back beyond 2000bc. Although both the technique and potters’ wheels have been refined over the years, the essential methods remain unaltered.

No other forming technique tests clay as much as throwing, so take particular care when preparing clay. It must be soft, pliable and sensitive enough to be shaped quickly, but firm enough to retain its shape when wet.
The key to successful throwing is the initial process of getting the clay into the centre of the wheel head before shaping commences. Once this has been successfully completed, a whole range of objects and shapes can be thrown, mostly stemming from simple shapes such as plate, bowl or cylinder forms.

Clay Pottery Wheel
Made this project? Share your version »