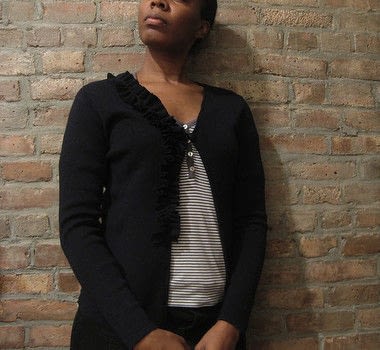 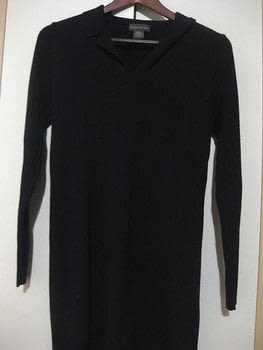 Kick Ass Cardi Refashion
What started out as an old, too small, moth eaten in places Banana Republic sweater dress has become one kick ass cardi!

If I do say so myself.

I am insanely pleased with it. That dress had been in limbo between "denial that I still looked great in it" and "disgust at the realization that it was too small and should go in the trash". I have worn this a TON since refashioning it. It is so versatile and warm and soft.

Here's how I did it:

Split down the middle.

Edges folded under and sewn down.

Curse and cut off messed up edge.

Cut strip for a belt.

Realize that you hate belted cardigans when you try it on.

Decide to make it a ruffle instead.

Make and sew on first ruffle in record time.

Swear a lot as you pick out the stitching on the second, less easy, ruffle.

The edging was royally effed up the first go round and another trim was required. I now have an unhealthy love for my rotary cutter, without which this project would have ended up a big FAT fail. I could never have cut so straight with a scissor.

Tamra D. 2nd September 2011
The cardi is great but your witty description and instructions are even better!LOL!
Reply