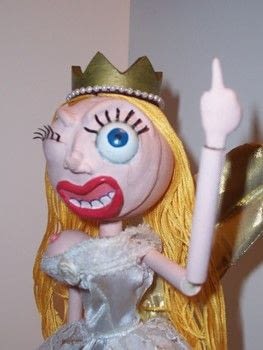 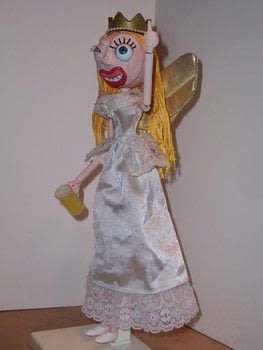 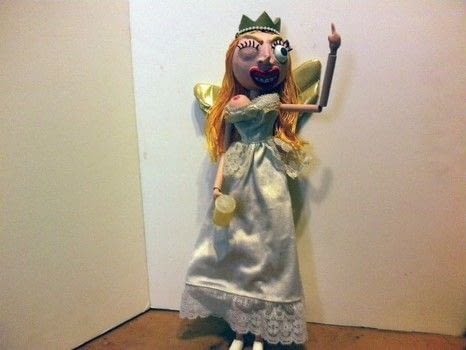 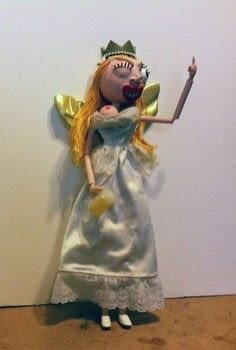 Leave your ID under your pillow and she'll bring you a brew!
One night after a rowdy game of beer pong, well several games I said to myself I should make a doll that enjoys a brew or two. Now I'm a bit of a beer aficionado so this idea grew on me, I just didn't know what I should make. So I went to the all mighty google with my quandary, I did an image search on the word drunk and I got a lot of interesting pictures. I found one with a similar face to mine, except both eyes were closed but I made up in my mind that I wanted her to have one eye open and for it to be ridiculous and gaudy. Whilst hunting for more plastic balls in my attic storage, I found amongst the corpse of our old broken plastic tree, a couple ornaments that were angels. Well I'm not an xmas fan so I greedily scavenged their parts like a yuletide ghoul. One of the angels had this dress on so I determined then that I was either going to make a drunken Bridesmaid or drunken fairy, I went with fairy because I found these wings amongst the crumbled Christmas chaos.

Her head is a plastic ball, I sculpted her face directly onto the ball and repaired the cracks after a full night of drying (I'm a bit of an insomniac so I sculpt late in the evening and work on the dry faces in the morning/afternoon) Her arms and neck are dowels. I had old paint brushes 1 1/2 inch or 2 inch, not certain but I cut the old cruddy bristles off and sawed off the handles (I used 2) I glued the two cut ends together to make an hourglass shape for her body, I reused the handles for her thighs and continued them below the knee with rectangular dowels. At the top of the hour glass I glued two wooden balls and filled in the spaces with clay and paper mache. I slipped the dress over the whole assemblage and attached her head and wings. I glued her hair (embroidery floss) on a few strands at a time with hot glue and I topped her head with a crown I removed from a nutcracker that I gave a face lift. I had the most fun with making her beer. Test tube shots! They're gross lol but if someone you know drinks them, save the acrylic tubes they come in. I used a small saw to cut a short length of tube and cut out a piece of acrylic to place at the bottom and stop the resin from coming out. I glued the little disk on the bottom and tested it for drips with water then thoroughly dried it. Meanwhile I mixed a two part resin and tinted it with a drop of yellow enamel paint and poured it into the little cup I made. I made the handle with the rim of another one of those test tubes. Bless her little drunk heart. 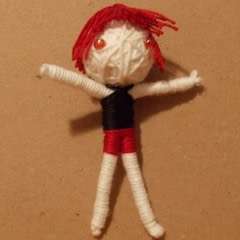 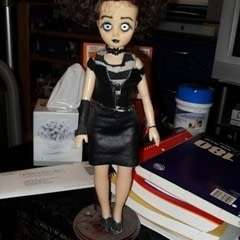 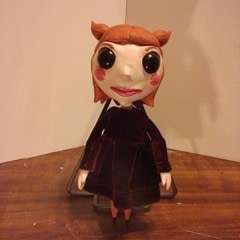 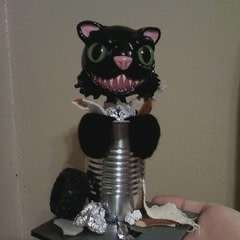 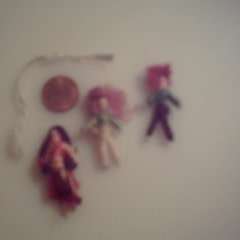 Sheila Squirrel 12th January 2011
Yay for beer goggles! I laughed so much I nearly spilt mine ;D
Reply