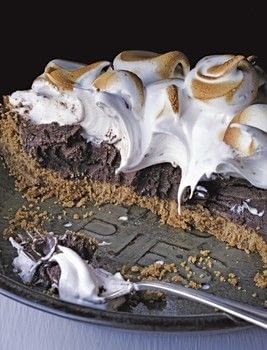 This pie pays homage to the Girl Scouts.
Serves 8

Juliette Gordon Low founded the Girl Scouts of America in Savannah, and every year thousands of green-sashed girls make their way to our city to see where it all began. I loved everything about being a Girl Scout, from toasting marshmallows to telling ghost stories, and, of course, “making new friends and keeping the old.” This pie pays homage to the Girl Scouts. I love camping, but these days it requires an Airstream trailer in tow.

Credit: “Excerpted from The Back in the Day Bakery Cookbook by Cheryl Day & Griffith Day (Artisan Books). Copyright © 2012. Photographs by Squire Fox.”

Gemma P. · Leeds, England, GB · 10 projects 14th July 2012
This was made last weekend, it was soooo yummy the topping was delicious but very very bad for my diet ha ha most good things aren't great for you though so it will defiantly be made again. everyone in the family really really enjoyed it too so a double victory.... Thanks for the recipe
Reply

Amy S. · St Louis, Missouri, US 7th July 2012
I was a Girl Scout for 13 years and received the Silver and Gold Award. My troop drove to Disney World when I was 13, and on our way back stopped at Juliette's house where we were honored by being able to retire the colors in front of the house. My 2 month old daughter has already been told that she has no choice, she will be a Girl Scout and has already gone camping twice this summer.
Thank you for this recipe. My family can't wait to make this pie!
Amy S.
Reply