Extract from Saved By Cake • By Marian Keyes • Published by Penguin 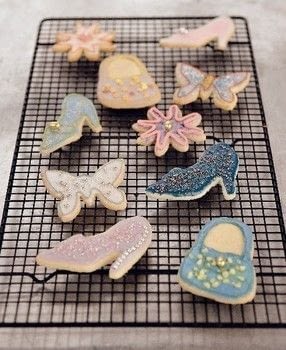 Saved By Cake
You don’t only have to make shoe and handbag biscuits with this recipe. You can make anything. Anything! Your only limitation is your imagination. Also, the cookie cutters you have. The flavouring I’ve used here is plain vanilla, but you can substitute any number of things – a teaspoon of dried cinnamon, the zest of half a lemon or a splash of Cointreau. For example, I’ve made cardamom and rosewater biscuits by adding four ground cardamom pods and a teaspoon of rosewater instead of the vanilla. I’ve also made lime and ginger biscuits by leaving out the vanilla and adding a teaspoon each of dried ginger and lime zest. It’s up to you. Have fun. Go mad.
The same with the decorating. I’ve given you a basic glacé icing recipe, but you can dye it countless different colours and use writing icing, glitter, edible stars, sugar balls and so on to create any number of effects. There are plenty of websites that specialize in edible cake decorations and you will be introduced to a veritable wonderland. But a word of warning – once you start, you can’t stop. You’ll find yourself thinking, but I simply MUST have some of these tiny sugar cats! How can
I make biscuits and hold my head up in polite society if they’re not sprinkled with tiny sugar cats?
Or mini candy canes! Or miniature edible butterflies!
If you’re in any way prone to addiction, you could be in choppy waters here.

Makes a variable number depending on the size and shape of your cutters!