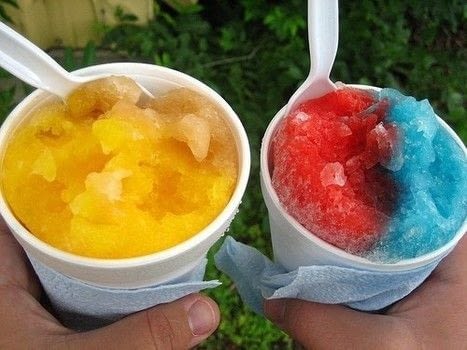 I am part Mexican and I love these treats.
As a child and teen my summers were filled with wait and longing. Everyday during the summer as the Respas Man came down my street. We children would wait to hear the faint honk honk of his horn and the jingling of his cart bells. We would rush out with the dollars that our Mom or relative had given us and get this cool tasty treat.

Time is about one hour or less depending on if you have to make the syrups or you have them handy.

Simple Syrup Flavored you can see my Simple Syrup How to or at the bottom of this one for more flavor ideas. Shaved Ice or Crushed in a blender.
Made this project? Share your version »

Ashley · San Antonio, Texas, US 2nd October 2009
I love raspas! The man who sells them in our neighborhood sells them for $0.50!
Reply

Phelicia G. · Coombabah, Queensland, AU · 6 projects 2nd October 2009
Lol Thanks Candy that is me Like my little story every summer day....It was like an addiction then I moved to Australia and there like Raspa what? lol I am glad you enjoyed my how to
Reply