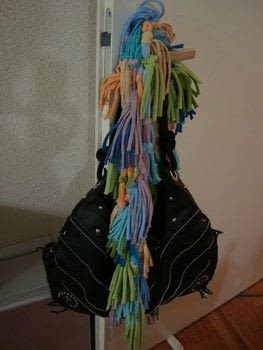 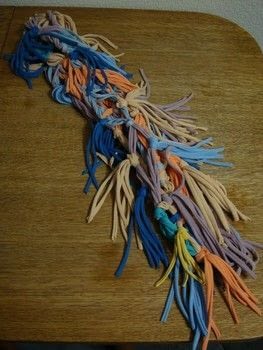 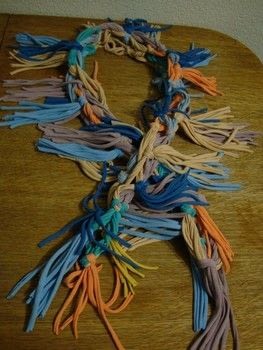 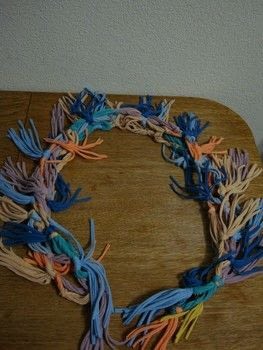 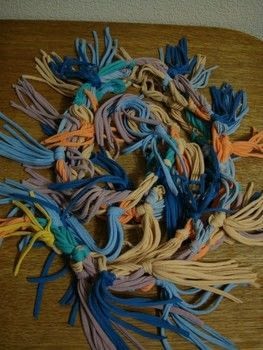 Based on Recycled Tee Circle Scarf by Erin
I used several different colors so I killed at least 15 different shirts (closet raid!)and I wanted something different so I got BUSY as you can see...lol.

The COOLEST thing about this style is I can add to it whenever I want. I did not have any green but I will soon (GOT IT as you can see) and I will just pop it in there and it can even be lengthened anytime in the same manner.

The loops are not tied together as it showed in the original project from Missy. Mine are ran through each other connecting the ends. It was made about 4 times longer than I wanted so I could fold the single weave over itself a couple times to thicken it up. I did this by looping the middle over my kitchen chair post standing back like I had reins and gently twisting it over itself, then did that one more time. I ran a loop through the two ends making one end of the finished scarf and then where the middle was I ran another loop through making that the other end. I cut the loose loops to creat fringe.

Then I randomly ran loops among the fabric, binding it to itself and cut all the loose loops. Hope that was understandable ;-).

Thanks for the idea Missy.. mine took a detour ;-)~

Nattie Gurl posted this project as a creation without steps

Nattie Gurl · 58 projects 23rd May 2010
LOL.. I will work on a How To this week with some new pics for you all ;-) Thanks for the inspiration DarkAshHurts.
Reply

DarkAshHurts · 119 projects 23rd May 2010
This is so awesome! Great job!
I think this deserves its own how-to...referencing the original as inspiration. XD

I didnt really understand ur explaination, but after starin at it for a good while i finally got how u did it! lol
I'm gonna have to modify my circle scarf to have tassles too. lol Thanks!
Reply

Nattie Gurl · 58 projects 21st May 2010
After cutting the rings from the t shirt I stretched them and made them curl. If they had seams I gathered the seams one in each hand and twisted once and brought the seems together. I did this twice with each ring so basically you end up with four to loops but to keep it neat I kept my seams together at the top.

Then, I did not tie them together, I ran them through each other if you understand what I mean so they would connect, no sew, no ties. If there are any seams if you keep them at the top you can carefully tuck them between the loops where the two connect. So I did that with alternating colors till I got it about 4 times longer than I wanted. Then I found the middle looped it over my kitchen chair post and stood back and held the ends like reins of a horse. I twisted them over each other in a gentle twist and then did it again. Then I put the ends together and took an extra ring and threaded it through both ends joining them and cut the free ends of that ring so I had strings. I went to the other end and ran a ring of fabric through (what would have been the middle if you understand) and cut it to fringe it too.

Roseann P. · Mililani, Hawaii, US 21st May 2010
That looks great! How did you do it? It looks way different from the original. I really like the extra fringe on it.
Reply