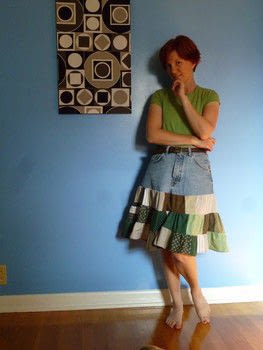 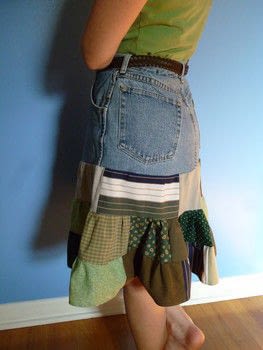 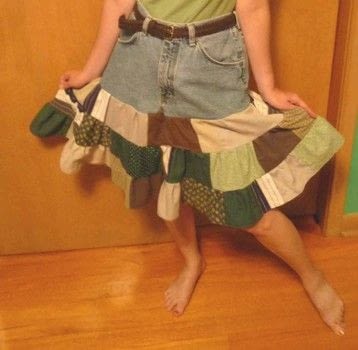 Some notes:
I wouldn’t attempt this with a regular sewing machine---too many seams that can fray, especially if you are upcycling fabric that may already been somewhat worn. A serger aka an overlock machine finishes the seams as it sews.

When I do this again, I will use the same technique of making the patches all one height but difference lengths. However, I’d probably make the lengths range from say, 2-6 inches, rather than from 2-10 inches, as I don’t think all those big patches looked good. They wouldn’t have been so noticeable in the lower tiers. I might also go for 5 or 5.5 inches high, and I think my next one might have at least four tiers.

I do like how the color scheme turned out. It worked well to have one fabric used in all three tiers, even thought the first tier was mostly brown, the second mostly green, and the third a mix of brown and green.

Arawynn · 8 projects 10th August 2013
This is too cute. Definitely would be a great way to reuse jeans and shirts.

J. Pario · Lincoln, Nebraska, US · 26 projects 11th August 2013
It was fun! I have already scouted out fabric for my next one.... The thrift store had a sale-- $1 for everything you could stuff in a brown paper sack. I am planning to play with pastels and stripes.
Reply

Sew along with #SewingSuperstar Jessica from Chambray Blues 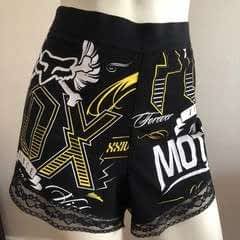