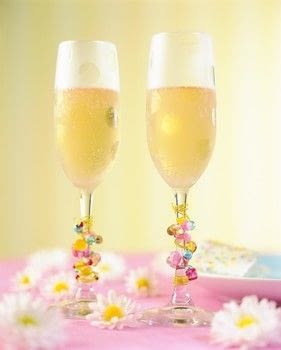 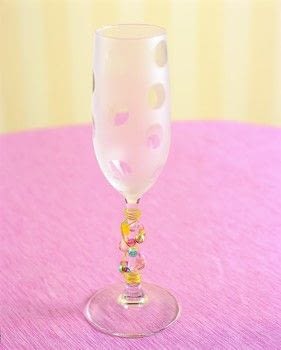 Crafty Ideas For The Bride On A Budget
Here’s to love, happiness, and just plain fun. Add to the gaiety of any proclamation with these toast-worthy flutes. Make a bride and groom set, or provide one for each guest to have and to hold, and to take home.

Today virtually all areas of the world have a celebratory drinking toast, which is declared before imbibing. The act of raising one’s glass and toasting may have originated as early as 12th-century Europe, where drinkers placed spiced toast in a cup of wine or ale to add flavor and absorb the sediment. As this tradition waned, revelers commenced drinking to a specific woman’s name, presumably in hopes that the female’s name would “spice” the drink’s flavor in place of the bread.

According to one fable, the first wedding toast began in France, where scorched bread was placed at the bottom of the newlyweds’ wine glasses, challenging the duo to a race. The spouse who drank the wine and ate the bread first would be the ruler of the couple’s household.

Another tale says Rowena, the daughter of a Saxon leader, made the very first toast at a feast in Saxony. As legend has it, Rowena toasted the British king, saying, “Lord King, be of health.” King Vortigern, being overwhelmed by her gesture, married her that very night.

Whatever the derivation, toasting a bride and groom has become a conventional blessing, filled with sentimental discourse or good-natured jesting.

Traditionally, the best man is expected to toast the pair with a short speech or poem. Allowing more of the wedding party to give individual toasts is growing in popularity, which sometimes includes the parents toasting the couple and the two toasting each other.