Pigs In A Blanket

Extract from Topsy-Turvy Inside-Out Knit Toys • By Susan B. Anderson • Published by Artisan 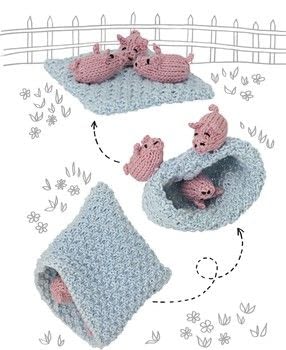 Kids and adults alike will love this cute and clever play on an old foodie favorite. It’s been a perennial in my household—I’ve baked those tiny hot dogs until the dough around them was golden brown more times than I would like to admit. Some of my kids even took them to school for lunch—once another mom telephoned me for the recipe!

With my long history with edible pigs in a blanket as well as knit pigs and knit blankets, I had to combine these favorites for an adorable reversible. I attached the pigs to the blanket with a stitch or two, but it would be fun to have a few separate piggies, too. So grab your fingering-weight yarn (new or leftover) and get started on your own knit pigs in a blanket!