Penny Robinson, All Grown Up 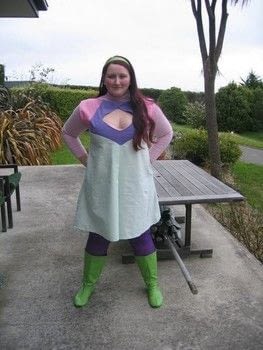 Pastel, vinyl, cleavage - what more could a girl want??
So, recently SciFiSoc (my universities Science fiction and Fantasy club) had a party entitled "Future! Of the Past!", where we had to come dressed in outfits which reflected the way people in the past thought we'd dress in the future. Since everyone would be turning up in some variants of spandex, glitter and glo-sticks, I wanted to go with something different, so decided to do a take off of Penny Robinson's outfit from Season 3 of Lost in Space, cause it is so cute!
The whole thing took me probably the grand total of 3 hours, including making the patterns for the boots and dress. The boots are just vinyl covers that I stapled to an old pair of slip on ballet flats which were near the end of their life. Was an excellently fun project, and a rather fun night!

Heather D. posted this project as a creation without steps