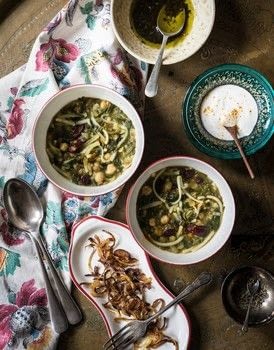 The Legendary Cuisine of Persia
This soup is thought to be one of the earliest known. In ancient Zoroastrian Persia it used to be called shuli; its main green vegetables were spinach and fresh clover. Instead of noodles, the flour and water were mixed to a thin paste and poured directly into the soup to thicken and enrich it. In later years, water was flicked on to the flour which was rolled into tiny balls (known as omâj) which were then added to the soup. But by the Sassanian period (AD500) the flour and water were being made into noodles, as they still are today.

In pre-Islamic times, noodle soup used to be eaten on the first day of each month, a habit which was carried over into Moslem Iran, for it is still served at the first prayer meeting of every month.

Noodle soup, or âsh-e pushteh-pâ (pilgrim’s soup) as it is sometimes called, is also served on the eve of departure of a loved one on the long and arduous journey to Mecca or of a cherished son setting off into the world. It is served as the main evening meal for all the relatives and neighbours who gather to bid farewell and to pray together for their safe return.

Noodle soup is one of the dishes made for religious pledges (nazr). These pledges are made as a thanksgiving to God for benign intervention in the affairs of the family: the miraculous recovery of a child from a long and serious illness or the safe return home of a much-loved family member after many years’ absence.

Such pledges involve the sharing of the family’s joy and celebration and are often made on an annual basis, so that on the same day each year bowls of this delicious soup are brought to the door by a devout neighbour. Even in modern apartment buildings in Tehran, a family’s happiness will be shared with all the residents of the block. (And when the bowls are returned, they should always contain a sample of the housewife’s cooking that day.) Such visits mark the passing of the years, and also serve to bring a community closer together, for no person can remain a stranger long among these constant reminders of shared celebration.

Noodle soup is specially favoured for pledges since the tangle of noodles is thought to resemble the tangle of paths in one’s life. They symbolise a fresh new start, and this is why noodle soup is often chosen to simmer on the stove during the transition from the old year to the new.

* 420 g/15 oz tins of kidney beans and chickpeas may be used and should be added at the same time as the mung beans and lentils.

‡ Persian soup noodles (reshteh-ye âsh) are available from Iranian stores, or can be made at home. Flat Chinese or Italian noodles may also be used, but must be broken into short lengths before being added. 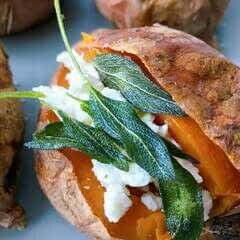