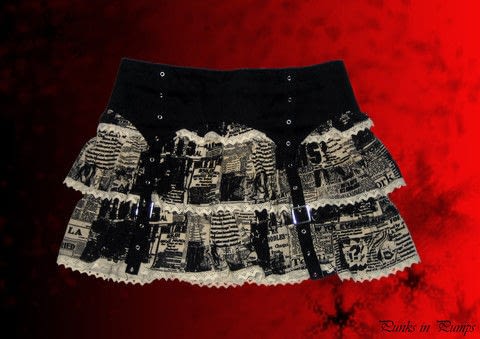 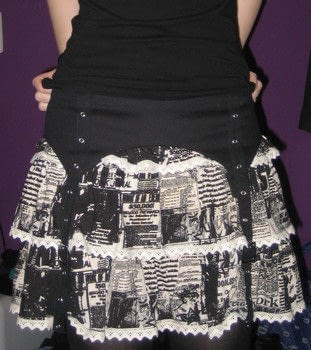 Satisfying my steampunk/dieselpunk addiction
I´ve seen this faboulous some kind of steampunk skirt in Lip Service spring preorder, but i live in germany and have not much money (usps is insane too!). also, i don´t like brown pleather...
so, i decided to make my own version of the skirt.
i bought two shirts with newspaper print, cut out stripes, dyed them with coffee and gathered them. Than i sewed on lace trim.
The yoke is made of black twill. The shape reminds of a garter :)
i sewed on eyelet tape on the outside and inside. You can close them with a clasp for (a little) gathering.

edit how-to: i didn´t take photos while i made this skirt, but i did my very best in illustrator to draw the pattern roughly. It isn´t the original size, but i made some measurements for orientation!!!!
i know i´m definitely not the best in explaining things, if you try to make the skirt anyway and don´t get it ask me and i´ll try to explain it until you can wear it!!!

edit 07.09.2010: attachment function works, so i uploaded the illustrations again... yes, i know i didn´t get it and uploaded the skirt twice, but i don´t know how to remove it...

2 T Shirt with newspaper print Interlining 2 ½ m Eyelet Tape 1 Zipper 4 Buckle(s) 4 m Lace Trim Twill i used black for the yoke and white for the skirt
Made this project? Share your version »

kaitlyn c. 26th October 2011
Really cool but where would u buy fabric with newspaper print? Do u no any craft stores or anywher tht would sell it?
Reply