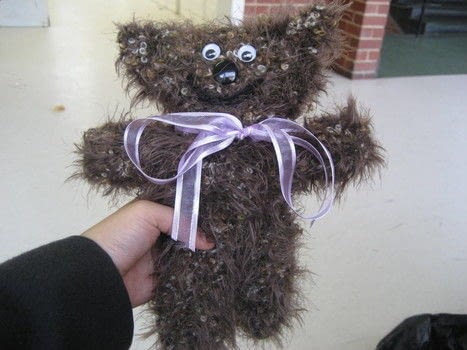 Really easy knitted bear.
This is really simple knitted bear. It's just two knitted sides of the bear (front and back, obviously), stuffed and sewn together. heaps easy.

I didn't take any pictures while making this bear. Sorry! just message me if you want something clarified.

*note* i just kinda made this up as I went along, so you know, you can do the same if you want to change anything to make your bear shorter, fatter, taller, more in proportion, whatever.

Charles Lee Ray · 18 projects 18th September 2011
he scared the crap out of me! lol I like his creepieness! cool!
Reply

Charles Lee Ray · 18 projects 18th September 2011
he scared the crap out of me! lol I like his creepieness! cool!
Reply

quirky been v. · U.S. Air Force Academy, Colorado, US · 8 projects 21st January 2011
awwww its so cute!!! i have deep secret love for teddy bears.. ill have to try that technique for connecting the legs...
Reply