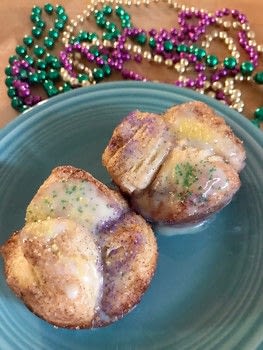 A fun breakfast take on a Mardi Gras tradition
I’m from South Alabama. Mobile, AL to be exact. While it has many attractions, this time of the year we’re best known for our Mardi Gras celebrations. Mobile is the home to the original Mardi Gras in the United States, despite New Orleans’ celebration being better known. Mardi Gras means “Fat Tuesday”, the day before Ash Wednesday, the beginning of Lent. In Mobile and surrounding areas, the frivolity lasts for several weeks preceding Ash Wednesday and is seen as more of a season of parades, costumes, and masked balls.

A popular treat during Mardi Gras Season is the King Cake. Despite its name, this is more of an O-shaped pastry made with a French bread dough than a cake. King cakes are traditionally flavored with cinnamon, drizzled with a confectionary sugar frosting, sprinkled with Mardi Gras-colored sugar, and stuffed with a small plastic baby (representing the baby Jesus). Tradition typically dictates that whoever finds the baby has to bring the next king cake. Flavors other than cinnamon can be found in bakeries throughout the area. And, though the colors of Mardi Gras in Mobile are Purple and Gold, Green has recently been added to this mix.

The muffin recipe I’m sharing with you has several similarities with a king cake - the cinnamon flavor and colored sugar. It’s a very sweet treat (especially with the added sprinkles), but quite fitting for the over-indulgence of the Mardi Gras Season before Lent is upon us.

Jennifer P. · Lynchburg, Virginia, US · 23 projects 26th February 2018
Saving this to make! It sounds SO delicious.

CraftyHope · Silverhill, Alabama, US · 10 projects 26th February 2018
Aw, thanks! These are really easy! AND, if you don't have the sugar sprinkles, they're just as good (but less festive!)
Reply 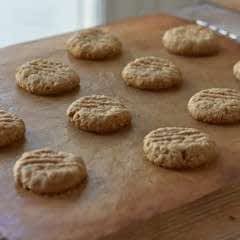