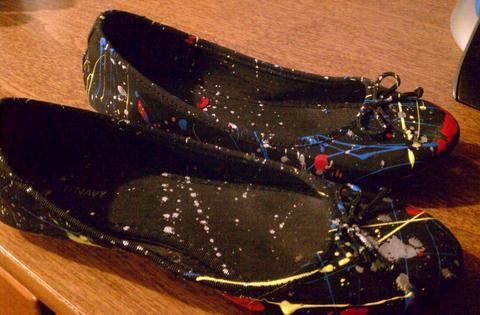 Based on Jackson Pollock Heels by ureeeya
Wowwy zowwy, the red was being not so nice, it wanted to be everywhere but the shoes!! But other then that an easy and awesome project!! I don't where heels a lot, at all, so I jazzed up some black flats I had. I only did silver on the inside, but some red snuck in too. It took me about 40 minutes because the red and I had our little turf war but the rest took about 10 minutes. : ) I <3 mine shoes!

Lau5ren posted this project as a creation without steps