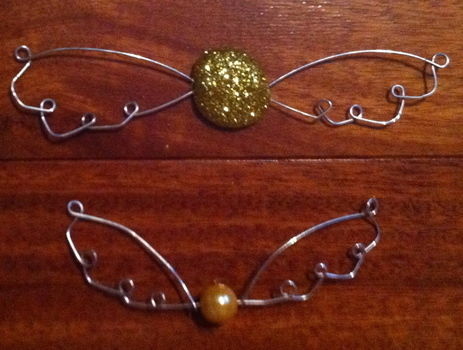 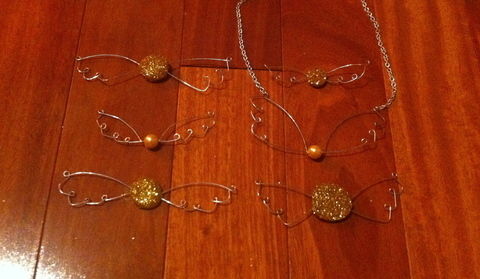 Harry Potter inspired golden snitches
I know this how to looks really long but it explains how to make both types of snitches in the picture. And I took lots of pictures so everything is really broken up.

This is my first how to so I would love feedback on things like what I could change for next time to make it better :)

I got this idea from a bunch of things all together. First I saw tons of snitches like this one http://www.etsy.com/listing/120873573/harry-potter-golden-snitch-bracelet-with?ref=exp_listing (My friend even sent me a picture of something like it) and my first thought was THAT WOULD BE SO EASY TO MAKE! But of course I didn't have any wing charms. Second was this project http://www.cutoutandkeep.net/projects/golden-snitch-lockets (which is really really cool) but of course I don't have a golden spherical locket either.. So I sort of put the two ideas together. And then /of course/ I only had 2 beads that were even close to gold. And one of my friends wanted me to make him one, which is where the top and bottom ones came from. I also got the idea from this project http://www.cutoutandkeep.net/projects/glue_pendants which I tried, but then while waiting for the glue to harden, I got bored and covered it on fine glitter.

I said the time was 20 minutes because I got distracted a lot while making these, I made a bunch of them, and I had to re-start a ton of times at the beginning to get it right so I don't actually know how long it took. Plus the first few take much more time, but once you make a couple you get the hang of it and its pretty easy and fast.
I also already had all the things I needed to make them, so I have no clue how much it would cost to make them if you have to buy the supplies, but I'm sure it wouldn't be very much :)

I apologize for the mess that is my work space... I was working on a bunch of projects all at once.