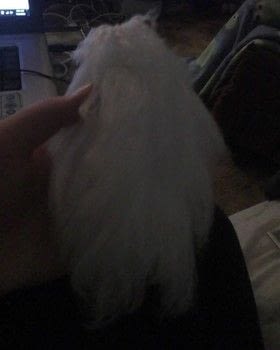 I decided to skip step 16 because I didn't like how it looked, and it made it more difficult to finish it. Also, I thought that the tutorial was pretty easy up until I got to Step 23 and 25. I was confused as to how to sew it on. The pictures didn't help much because I couldn't figure out whether I should wrap the tuft around a single strand, around the whole base, or around two of the bases strings.
I didn't have a straightener so I couldn't flatten the knot, which made it difficult to sew. Next time, I'll try to wrap it around a single strand instead of two, maybe that will be easier.

All in all, I thought my first attempt at this tail tutorial turned out pretty well, I'll be making it in the future for sure!

Silence N. posted this project as a creation without steps