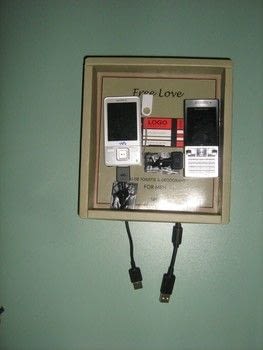 Based on DIY Charging Station by jannypie
I got the idea from jannypie's Diy Charging Station, but mine is not fully based on their version.
I used one box, whick was like chest box actually. I had to cut off the top and re-stick it with the concave side pointing upward so I can put my music player and my phone in it, got it?
Then I made the holes to get in the adaptors. Which was kind of hard for my phone because I had to make a hole in the middle of the carton.
Then I whitewashed everything using electrical tape, whick also helped me make the holes tinier.
At the end I glued both the parts of the box to one another leaving the USB jacks handing from outside the box.

OFFTOPIC: Gosh, it took me more time to write and explain the process than the process itself! Believe me, it's really hard to explain things when you are not a native English speaker.

Polly G. posted this project as a creation without steps