Cut Glass Bottles With Stuff Around Your House 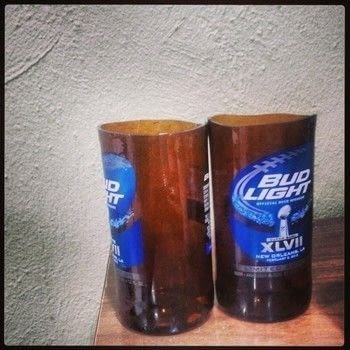 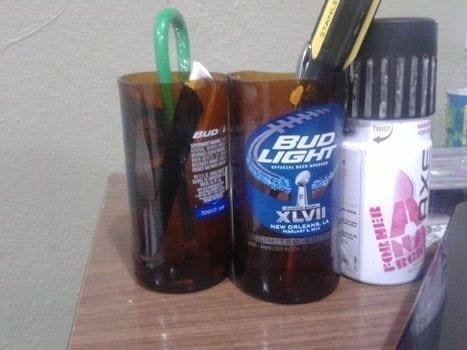 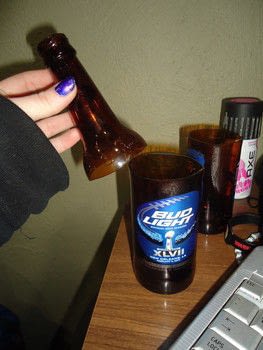 This really does work! Cross my heart and hope to die, stick me with a broken bottle in the eye.
::Warning::
I probably a good idea to read all (or most, at least) of the directions and stuff before you try this. But you can totally skim over all my weirdo rambling parts though.

I saw this on pinterest and I thought it was a prank (like the glow in the dark mountain dew thing ugh -_- I was soooo disappointed) Me and my sister decided to try it while she was home for Christmas. Totally does work.

Sorry I don't have any real process pictures! I just recreated the basics on my desk next to my computer, minus the nail polish remover. The instructions are easy enough to follow anyway. PLUS! I write long winded instructions.

I have tons of things planned to branch off of this one so there should be pictures for this one soon. It's cold out now so I don't have much motivation to be out there.

I also apologize for the fact that I can't remember the original site that I read this on, aside from Pinterest.

Your glass bottles have to be kinda thin. I used beer bottles, obviously. We tried wine bottles too, but yeah, that didn't work. (I have to figure out a new method for that one) So beer bottles, smirnoff ice bottles, even wine cooler bottles...whatever else you crazy kids are drinking out of glass bottles these days, 40 ouncers! Maybe? I haven't tried Sobe bottles, and my next attempt is gonna be the imported monster bottles, they're such a pretty colour of green. I'll definitely update if any of my later attempts with different thickness of bottles works.

You may want to find one of those long lighters like the kind for lighting candles and stoves and stuff like that. Bic's work too as long as it lights a fire really. It just all depends how good you are at not burning yourself when you try and start fires.

The ice water needs to be deep enough to submerge your bottle. So keep that in mind. And it doesn't need to be completely ice, just really cold. I just filled up a 5 gallon bucket halfway and left it outside in the midwest.

The cup should be one you don't care about messing up, no paper cups though (it would just leak out). I used one of those tiny disposable gladware dipping cups. I wanted something with a lid so the nail polish remover didn't evaporate. I don't really know how safe it is to have had nail polish remover in a drinking cup, I'd imagine the plastic could absorb some of it. Glass should be fine though as long as you wash it really good. If anyone has an actual straight answer on that one, let me know.

As far as the latex/nitro gloves....I know its nail polish remover and it belongs on your hands and everything but it's still toxic to ingest. And they won't really save you from the glass really but hey safety first right? The latex gloves are good because you can still have nearly full dexterity when they're on and they're disposable.

i waited for the yarn to stop burning the 2nd time and the bottle broke in my hands. :/ but the 1st time i threw it in while still on fire.. but the flames were burning so big that it broke in the wrong place. :/ oh well. i'll try with plain remover tomorrow.

... maybe it's my nail polish remover... bah I'll try again with your tutorial

ViviGoesRoar · Guaynabo, Guaynabo, PR · 1 project 11th January 2013
I read that it's easier if you braid the yarn that goes around the bottle, a simple three strand braid should do it. I'm totally going to try it. If I convince my sister to help obviously!

aranumenwen · Aurora, Illinois, US · 117 projects 12th January 2013
Before we started we were talking about different methods of going about this, just in case the first attempt failed. We figured braiding it made sense too. We tried it, it does work. And for the most part it doesn't make a difference either way. Although the one that had the braided yarn is the only that had a chip in the edge . I don't know if its a big enough margin to matter, but since there's less yarn/bottle surface area it doesn't distribute the heat as evenly. Hence the chip. Could be been an unrelated coincidence as well.
Reply

Krista B. · Hydesville, California, US · 44 projects 10th January 2013
OMG!!! I TOTALLY just thought of this last night!!!! With the wine bottles... but I was all "pft, what cuts glass...?" other than heat buttttt..... what??? MAN YOU GOT IT! NOW I can try this and paint! of coarse I'm gonna get my husband or friend to help.... seems like there should be someone to blame when fire is involved...LOL. Listed under "when I have the guts"

aranumenwen · Aurora, Illinois, US · 117 projects 12th January 2013
There isn't that much fire really. I thought it was gonna flame up all crazy like. My sister spins and eats fire. So she was ready for it. Its a seriously controlled burn. Ridiculously so. The only reason you really need to be burning the year above water bucket is because you have to change the temperature dramatically before it starts to cool down too much.

Regardless, i have faith in you!!!
Reply

Amberlynn Reid · Kathmandu, Central Region, NP · 67 projects 10th January 2013
Hmmm...this may be interesting.,!! And btw can you give me some info about that Mountain Dew thingy?

aranumenwen · Aurora, Illinois, US · 117 projects 12th January 2013
The mountain dew thing was a prank on you tube. Somebody posted a video saying that if you mixed mountain dew, baking soda and something else and then shake it up it'll glow in the dark. So of course I'm thinking that I absolutely had to try it. Doesn't work. I was so disappointed, and to top it off, I wasted mountain dew. (Which I drink religiously!!!) I did some research afterwards (I was too excited to try it to even bother reading the video comments) but it was an admitted prank. So now they have videos about putting glow stick innards in Mountain Dew, which, yeah duh of course that'll make it glow!
Reply