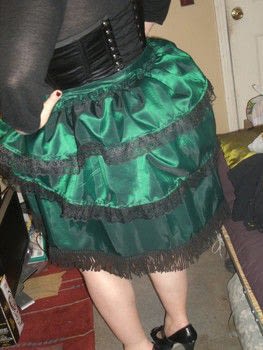 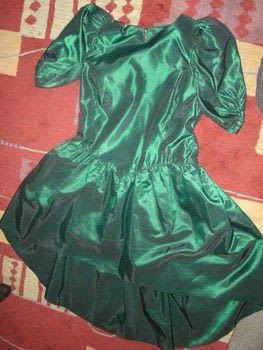 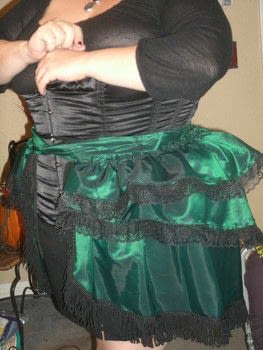 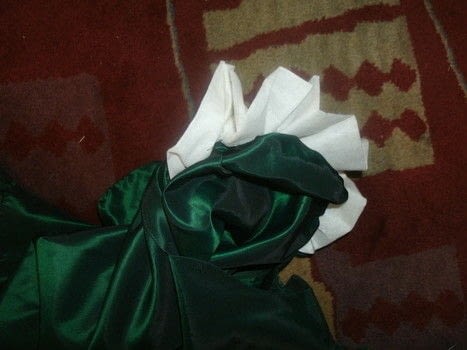 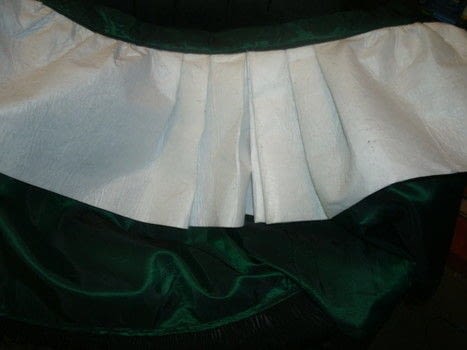 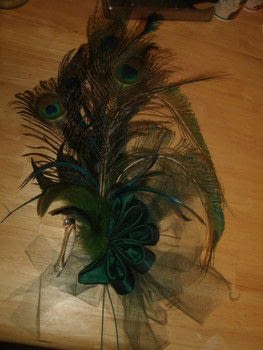 Based on Burlesque Bustle Skirt by Becca K.
I made this from a dress I found at the local thrift store. It was too small, but the fabric was great! This was pretty east following Becca's guide. I wanted to avoid all those layers in the waist band. Not only does my machine not deal with that much bulk well, but I intend to wear this more than a couple times. I feared all that weight in the band may pull out & be inconvenient to repair.
Instead, I made a very tiny hem at the top of the two upper ruffle layers. I then basted these layers (separately) and gathered them. Once they were both gathered to the length I needed, I stitched them together, then stitched them (as one unit) onto the skirt (with the bottom most layer stitched into the waist as usual).
The dress had some crazy poofy shoulders that were held up by a layer of fusible interfacing. The maker has fused it to itself, folded it some & sewn it into the shoulders. Awful and ingenious. I used the same method to add some poof to the back of the bustle. I used the full width of the interfacing; folded in half length wise (then fused)& folded & sewn into the waist with the single skirt layer. (Now you see my concern over the waist band bulk?)
I wear this over a black mini skirt since I left the front open. I like the look of this. I also made a ridiculously large hair piece to match. It's very burlesque/showgirl. I love it!

ZBlue posted this project as a creation without steps

Sheila Squirrel 21st February 2011
The colour is gorgeous. Just shows what you can find in a thift shop. I like your solutions to balance the design