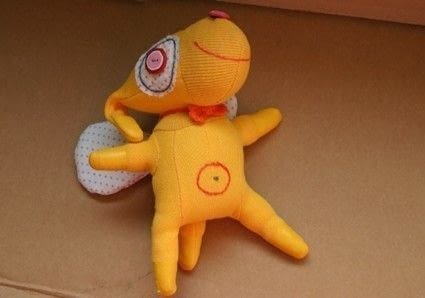 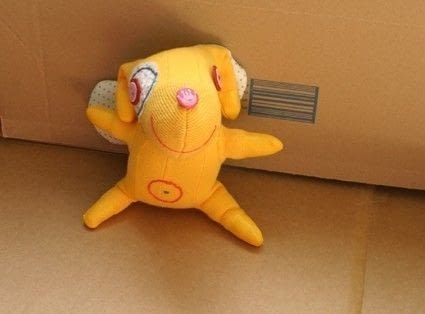 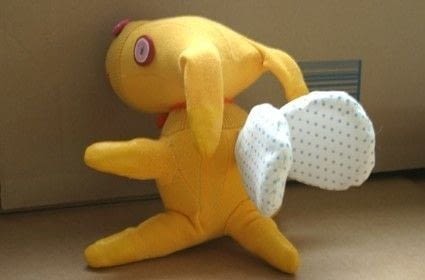 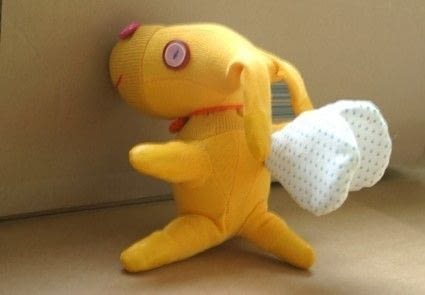 angle doggy of hankerchief, and scraps
This summer i have made for a dear friend of mine this dog of hankerchiefs , to taken care of her in to tough times
I saw those hankerchief in the garden store for light work , and thought ooooh this is pretty for makin the beware angle dog;-D The other materials are all of scraps i had allready, so it wasn't sooo expensive;-D
I had used the tute of Martha Stewart , so thank you Martha.:-D
Because i wanted to make a beware angle dog i have made it a little bit differend. I have added a crochet tittle tiebow and wings and an eye patch of the same fabric of the wings.
You can use mine patterns for the wings en the eye patch or make your own.

this is how i made the wings:
cut it out twice of fabric, and one of fuesible web to give it some filling and strenght.
pin both fabric sides , the good side on the good side and on top the fuesible web and sew this together you can use a sewing machine or just on hand.
Let the space between the marks free.
In the round and sharp edges you must make tiny cuts to create a nice line
Turn the inside out.
and pin the whole wings sides down and the open side fold it neatly in, and sew the whole wing.
then when you have made the dog you must sew the wings in the middle of it on his back .

The eye patch and the embroidery:
The eye patch i have cut it out ones and didn't zig zag it.
pin it on his head in the place of his eye. and make some embordery stiches to sew it down on his head.
I have made by embroidery lines his mouth and his bellybutton.

at last i have made a small crochet bow.:
make a chain of 10 . and on that you must make three rows of double crochet stiches,
cut of the end and weave the ends.
for the middle make a long chain and sew it on the bow , turn it around the middle three times and sew it so you have a tight middle and the crochet shape is now look alike a bow the other end lay it round his neck and sew it on the backside of the bow. Cut the yarn and weave the end.
then you sew some buttons on his eyes and on his nose and you're done;-D
much fun with your gaurdian angle dog give him some hugs for me and i think he will do his best for you;-D

Jet H. posted this project as a creation without steps 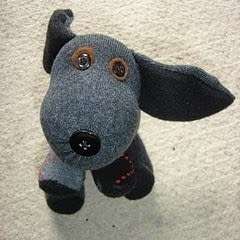 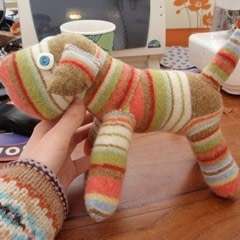 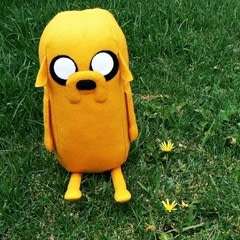 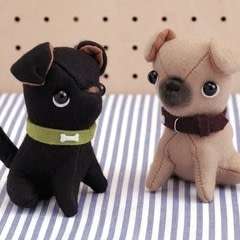 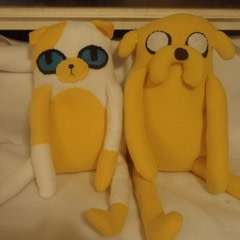 Jake And Cake Plush
Made this project? Share your version »

karindehaas · 31 projects 29th December 2010
I hope it worked, I'm sure it did, who wouldn't want a guarding angel dog like this
Reply