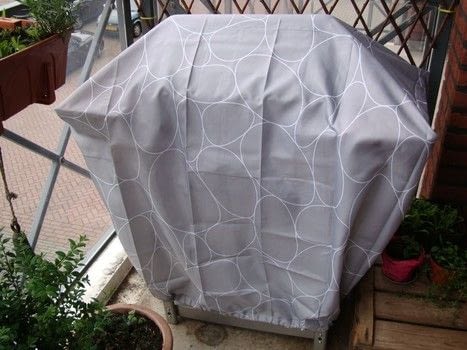 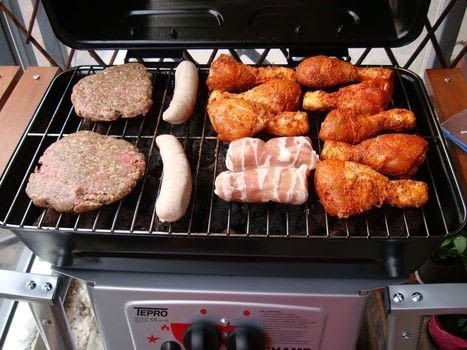 Turn a 7 buck polyester shower curtain into a really cool custom water resistant BBQ cover fast!
Ok, so after 2 years I got my boyfriend interested in a BBQ for the balcony. I know it should be the other way around but he's a big time computer techie and has spent to much time indoors and has never had his own BBQ and known the joy of BBQ bliss on his own balcony/backyard.

Sooooooooooooooo... after several hours he and my son got that baby together and we FINALLY ate around 7pm for the first time that Saturday.. but it was so yummy. Our own homemade kabobs fresh off the grill out our back door.

Problem... Sunday morning brought a downpour, wonderful, refreshing and needed but QUICK! grab the towels and get the new BBQ dried off so it doesn't rust! We decided we needed a cover.

Well after spending several hours comparing prices of anywhere from 30 to 50 bucks for one I suggested we get a cloth shower curtain and I would just make one.

Well 7 bucks and a couple hours later tadaaaaaaaaaaa... we had our own custom fit grill cover. I just draped it over, pinned it where it was needed, clipped and sewed it, added a drawstring around the bottom and it was done. It's water resistant to begin with but a good coating of camp spray like the stuff you put on a tent will make it water proof.

You can do it too! Would love to see your creations, so SHARE!

Nattie Gurl posted this project as a creation without steps 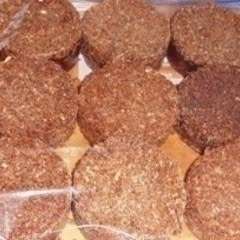 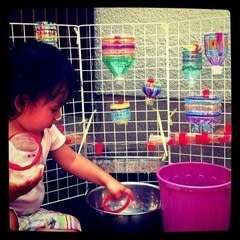 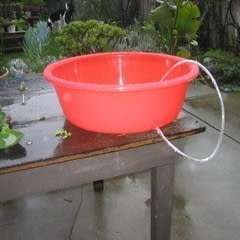 Rain Recycler, For Under $10 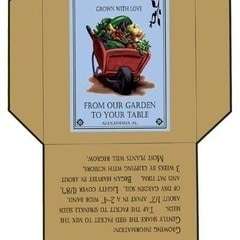 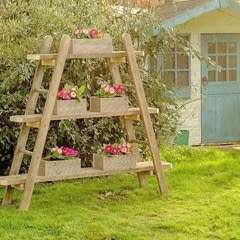 Ladder Plant Stand
Made this project? Share your version »

blufairy · Sherman, Texas, US · 3 projects 8th May 2010
that's really cool its my favorite thing about diy when you outsmart the man and get to keep your money.
Reply