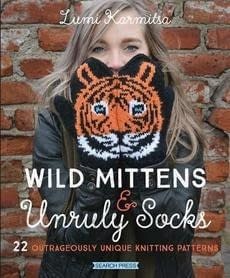 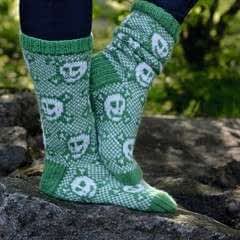 I'm Lumi Karmitsa, a Finnish knitwear designer and an author of three knitting books. Since the publication of my first book in 2016 I've been living in a tiny old house in the Finnish countryside with my loyal companion Caleb the dog. My days consist of taking long walks with Caleb, reading, writing and doing all sorts of crazy crafts but mostly I just knit, knit, knit. I lead a quiet life and consider myself lucky for being able to do so.

Wild Mittens & Unruly Socks has got 20+ colourful stranded knitting patterns for mittens and socks. The designs are far from traditional. There are laughing skulls, Jesuses, lettering, animals and flowers. If you like to knit gifts for your friends and family, this book is perfect for you, because there is something for everyone.

Wild Mittens & Unruly Socks is my first book, originally published in 2016 in Finnish. I was the dark horse of the knitting scene back then since the book took everybody by surprise and was an immediate success in Finland. I started designing its patterns with hardly any experience in knitting after I had made a pair of fair isle mittens for a friend and realised that there is no limit to what you can do with stranded knitting. I knew pretty much right away that I wanted to publish my designs in a book form, because getting a book published had been a life-long dream for me. I would have never guessed that my first book would be a knitting book, though.

I don't really have any favourites. I usually like the most recent project I'm working on the best, and a lot of projects have been running through my needles since this first book of mine. However, the funny skeletons with Christmas hats on Spooky Christmas Socks still make me laugh. It was such a daft idea but it works.

It's probably going to break my back eventually, but I just love working in bed. That's where I knit, write and draw, enjoying the light coming in from two windows and the silence of my hundred year old house. In the winter I light a fire in the fireplace and in summertime a rose bush gently brushes the window.

Was I Michelangelo as a baby? Probably not, but I can't have been less creative than other kids, since I've been doing nothing but crafting as long as I can remember.

I guess making artsy things is a way of life and you don't really pay attention to it. I feel as though I've always been creating something, whether it's a tree house, a painting or a novel. I still wouldn't dare to call myself an artist: I'm just someone who does stuff to entertain herself. Preferably beautiful stuff, though.

I started my journey as a knitwear designer with no knowledge of the knitting scene, and I must confess that I still don't follow much what others do. I've got two books by Cookie A, and I love her sock desings and appreciate the clarity in which her patterns are written down. I'm also in constant awe of Japanese designer Hitomi Shida. Every one of her hundreds of lace designs is more intricate than I could ever come up with.

Sometimes I pick themes that are close to my heart. For example Chihuahua mittens from Wild Mittens & Unruly Socks were inspired by my dog Caleb. More often I just sit down and try hard to come up with an idea that is either new, pretty or funny. While designing stranded mittens and socks I'm also guided by the limited number of stitches. The biggest challenge is to draw a picture that is small enough but still recognizable while keeping in mind that the floats behind the work shouldn't be too long.

My third book was just published a month ago in Finnish. It's a beautiful book of chunky cable and lace socks, all tasteful and moderate. I'm thrilled I could do something so different from my previous colourful stuff, but I think I'm ready to go all crazy with stranded knitting again.

We don't have any more information on this book right now.