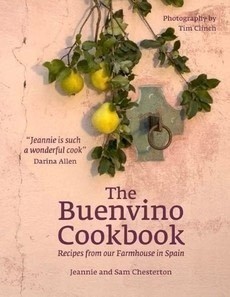 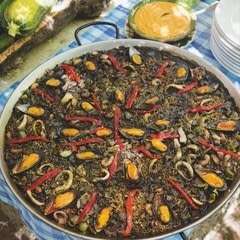 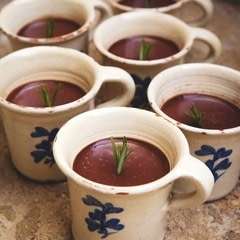 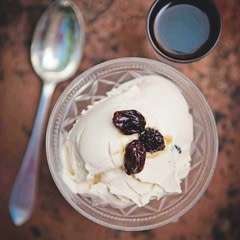 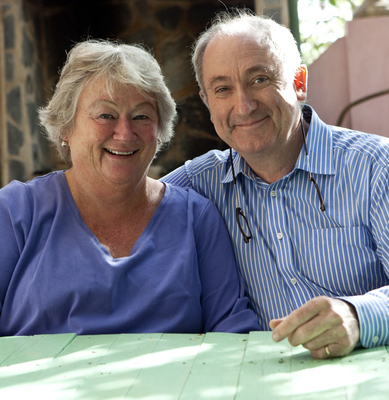 Jeannie Ogilvy-Wedderburn and Sam Chesterton were married in Alyth, on the borders of Angus and Perthshire in September 1983. “We were both getting on a bit!” says Sam meaning they were both in their late 30’s Sam was already living in Spain about 2 hours east of their present location, so after a honeymoon spent in the West of Ireland and Wester Ross, they flew straight out and started to hunt for an old hacienda to convert into a small Bed and Breakfast/guesthouse.

Jeannie had spent all her working life cooking: running wine bar kitchens in Hong Kong and Edinburgh, and also running shooting lodges in the highlands, where Sam sometimes came to help as ‘butler’. Serving dinner in gumboots as the equinox tide flowed into the dining room from Gruinard Bay was one of the great experiences not to be forgotten!

The book, named after our farm, contains our favourite, chiefly Spanish recipes. They are not always entirely traditional, as Jeannie has her own way of doing things especially after her years of experience with other cuisines. Some of the recipes are purely Spanish however, and we work with good quality wholesome Spanish ingredients, which are now easily found in the UK and elsewhere.

Each comes with a story, and we also tell the tale of our lives here in the mountains of western Andalusia; how we arrived, how we found our place and how life has changed over the past 30 years in this beautiful corner of Spain. It’s the sort of book that food-lovers can take to bed, and read for inspiration before turning the lights out and dreaming of rolling hills, ripe fruit, Spanish wines and jamón.

Jeannie has been running cookery courses over the last 20 years or so, but one of the other activities we offer at Finca Buenvino is photography courses, nowadays mainly “Food and Travel” photography. Our earlier coursers were called “Natural Light, Natural Food” which reflected the lack of artifice in our photographs, and the mainly organic ingredients we use here on the farm. Tim Clinch, the renowned travel and interiors photographer has been running our courses, and suggested that since we had all these images of our farm, and of the food we eat, why didn’t we collate everything and make a book? We also had the recipes and the stories to tell, and many clients over the years had been saying, why didn’t we write a cookbook? So here it is.

It’s hard to say; everything is so delicious; but we both love the lamb roasted with garlic, and rosemary with chocolate gravy. The salmorejo (a thicker version of gazpacho, with hard boiled eggs and jamón sprinkled on top, is a summer favourite. Saffron ice cream is yummy, and orange and almond cake can be served plain with a little sour cream, or else smothered in chocolate ganache after sprinkling with Grand Marnier. (Hardly traditional, but good for special occasions!)

Jeannie’s kitchen is cool, with white marble topped surfaces, and grey painted cupboards. Under the counter we have rendered open arched niches, also painted grey gloss on the outside and white within, where we store our plates and crockery. Everything gets used so often it’s not worth having cupboard fronts so we do have to wash plates before use during hot, dusty summers!

Outside is a shady vine-covered terrace with a woodfired bread oven and barbecue grill, so we often prepare our meals outside, and we always dine on the terrace from June- September.

Sam’s writing space is a cosy, chaotic (with paper!) former guest bedroom, with fireplace for the winter, and wonderful views out over the hills. On hot summer days the bluey-green shutters are closed and the windows thrown open, so that the breeze can blow in and the sunlight is kept out. It’s like working in underwater light.

Yes, Jeannie has always cooked since her teen years at the Cordon Bleu school in London, and Sam has worked in fringe theatre, written short stories, and attempts to paint from time to time.

Straight from cooking school Jeannie was off to cook for a private house party in England, over a polo weekend. Thrown in at the deep end with members of the Royal Family eating her food, she cooked the traditional standards. Boeuf Wellington and lobster Thermidor.

Sam was taught to cook by Austrian neighbours in London when he was 14. Zabaglione was one of the first things he learned to make.

In the garden, in the market, at the butcher’s or fishmonger’s. Also of course eating out with friends or in restaurants in Spain and Portugal and Morocco. The fridge, and the leftovers within are often a source of inspiration for tapas, too.

Trying to convince one/any of our 3 children to get involved with the farm, the kitchen and marketing. As we approach our seventies, we need some young blood and young ideas! We still love what we do, but need more help with the acres of forest, and the organic gardens.

For over thirty years, Jeannie and Sam Chesterton have lived high in the hills of Spain s western Andalusia at Finca Buenvino, their welcoming pink farmhouse, which they have run as a guesthouse achieving international acclaim for their cooking and also their cookery courses. On their 100-acre estate the Chestertons grow their own organic vegetables, fruits and chestnuts, and raise Iberian pigs which are killed for jamón Ibérico, salchichón, and chorizo. Violet Andalusian hens, a rare breed which they are helping to conserve, produce fresh eggs for breakfast, and homemade breads and jams are always on the table in the morning. Dinners are a social occasion, with summer dining under the stars, or in winter guests assemble at the table in the panelled dining room. Talk of food is of the essence always!