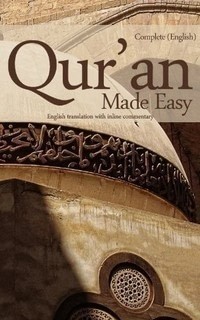 No.1 Bestselling English Quran Translation in the Kindle Store ****

*** Now also includes the full Arabic text of the Quran ***

This is the complete english version which includes all 30 sections of the Quran as well as the inline commentary and introduction to the Quran.

In preparing this translation of The Quraan, the dilemma was whether to use very ornate and elegant language which could compromise clear understanding for most people or to use a simple and clear style of language. Because the intention was to make The Quraan clear to every person, the second style was chosen, even though it may at times lack the dignity and lofty tone. It was also chosen because thousands of English-speaking people who are not very proficient in the language found the lofty language of other translations difficult to understand. This translation caters for their needs by providing where necessary synonyms between brackets. It is the language of only the Divine that can combine exceptional eloquence and ease of understanding.

Unlike in previous translations, footnotes are not used in this translation. Rather the explanations which have been given between brackets, serve multiple purposes. Firstly, they save the reader the need to look for the corresponding footnote which often hampers one's train of thought and understanding. Secondly, the explanations enhance the meaning of a verse by adding text which is often hidden. This is especially necessary in a translation of the Quraan because the Arabic text is extremely compact and rich in meaning, and to render the same meaning in another language requires the use of many more words. By using words between brackets, the essential text of The Quraan is not confused with the additional words that are required to promote understanding.