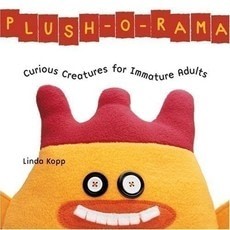 What’s the big new phenomenon, with legions of devotees? Making lovable stuffed monsters! Influenced by the popularity of Japanese animé and video game culture, urban illustration and design, and the do-it-yourself craft movement, these designer plush toys are everywhere—even museum stores. Yet they’re simple to sew. Just take fabric, a needle and thread, and stuffing, combine a touch of cuteness with a dash of utter weirdness, and you’ve got one of the oddest, most irresistible creatures ever. And these 30+ projects—including furry, green-lipped Monkey; Greggles, who sports a coif of tentacles; and flirtatious Polly, who has her three eyes on every guy—are as much at home in a trendy loft studio as in a child’s room. They’re unabashedly handmade, but bold, colorful, and very modern. A thorough Basics section provides all the fundamentals, from fabric selection to stitches to the ins and outs of the construction process. And, as a bonus, there’s a handful of profiles of select plush designers with photos of their work.