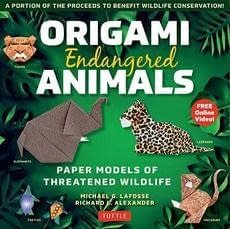 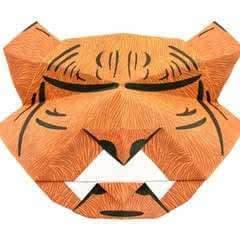 "Through the intricate art of origami, LaFosse and Alexander succeed in educating all ages about wildlife conservation and the importance of preserving our Earth's endangered animals." —Jack HannaA portion of the proceeds benefit wildlife conservation.An interactive way to foster appreciation and understanding of our planet's endangered species! Origami Endangered Animals Kit, from master origami artists Michael LaFosse and Richard Alexander, is designed to educate and entertain in equal measure.This origami kit includes everything you need:48 large sheets of high-quality double-sided folding paper A full-color 64-page instruction bookFree online video demonstrationsEducational notes about endangerment and threatened speciesThe 12 animals featured in this kit range from the diminutive Macaque to the massive Blue Whale, and also include:The Leopard: These big cats are the victims of shrinking habitats and trophy hunters. Only 12,000 to 14,000 remain in the world.The Rhinoceros: These animals are frequent targets of poachers. There are 28,000 to 30,000 individuals remaining.The Macaque: These clever primates suffer from disease and shrinking habitats as farmlands expand.The Gorilla: These critically endangered primates are being rapidly hunted to extinction.The Sea Turtle: Ungainly on land, these reptiles are victims of beach development, bycatch, poaching, marine debris, and more.The Tiger: A ferocious apex predator, these big cats suffer from shrinking habitats, hunting, and poaching. Only 8,000 to 10,000 individuals remain, half of them in captivity.The Elephant: The largest land mammal, these massive herbivores are threatened by habitat loss and poaching.The Great White Shark: These impressive predators are critically endangered due from overfishing, and slow reproductive maturity. Only around 3,500 individuals remain.The Blue Whale: The largest animal on earth, tipping the scales at over 120 tons! These giants were nearly hunted to extinction and are now recovering their numbers, but face many environmental challenges. There are estimated to be 10,000 to 25,000 individuals remaining in the world.The Emperor Penguin: These majestic flightless birds live exclusively in the southern hemisphere. Not yet endangered, but severely threatened.The Giant Panda: These cuddly bears are threatened by habitat pressure and low birthrates. Only around 1,200 remain in the world.The Australian Sea Lion: These mammals spend most of their time in the water and are heavily hunted, their food sources heavily fished out until recently. Fewer than 15,000 individuals remain.These fun-to-fold paper animals are an ideal way to bring natural beauty into your home or office, while also highlighting the plight of endangered wildlife species. Animal figures are the most popular form of origami, and now anyone can use them to learn more about these important species.