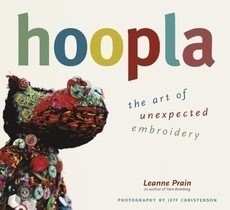 Hoopla: The Art of Unexpected Embroidery


A Library Journal Best Book of the Year

Hoopla, by the co-author of 2009's bestselling Yarn Bombing: The Art of Crochet and Knit Graffiti, showcases those who take the craft of embroidery where it's never gone before, in an astonishing, full-color display of embroidered art. Hoopla rebels against the quaint and familiar embroidery motifs of flowers and swashes, and focuses instead on innovative stitch artists who specialize in unusual, guerrilla-style patterns such as a mythical jackalope and needlepoint nipple doilies; it demonstrates that modern embroidery artists are as sharp as the needles with which they work.

Hoopla includes twenty-eight innovative embroidery patterns and profiles of contemporary embroidery artists, including Jenny Hart, author of Sublime Stitching; Rosa Martyn of the UK-based Craftivism Collective; Ray Materson, an ex-con who learned to stitch in prison; Sherry Lynn Wood of the Tattooed Baby Doll Project, which collaborated with female tattoo artists across the United States; Penny Nickels and Johnny Murder, the self-proclaimed Bonnie and Clyde of embroidery; and Alexandra Walters, a military wife who replicates military portraits and weapons in her stitching.

Full-color throughout and bursting with history, technique, and sass, Hoopla will teach readers how to stitch a ransom note pillow, mean and dainty knuckle-tattoo church gloves; and create their own innovative embroidery projects. If you like anarchistic DIY craft and the idea of deviating from the rules, Hoopla will inspire you to wield a needle with flair!

With a foreword by Betsy Greer.