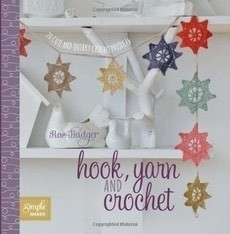 by Ros Badger · Published by Quadrille 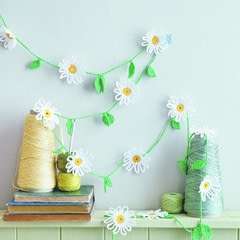 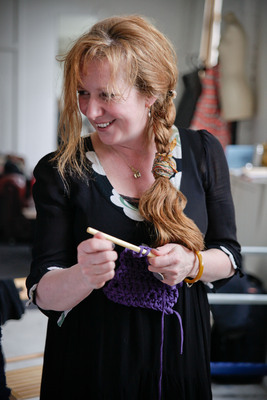 I studied Textiles at Chelsea College of art over 25 years ago and specialised in knitwear design. Since then I have produced my own collections for men and women and more recently hand knitwear for children under my own Little Badger label.  Throughout the course of my career I have designed and produced knitwear for lots of other companies, from Betty Jackson, Johnsons La Rocka  to M&S among others. I  also once designed a range of bespoke hats for 'The Edge' from U2  and I was knitting expert on C4's Big Breakfast programme (blast from the past), so I have a varied past but lucky enough to make a living from what I love doing.

Hook Yarn and Crochet is my 7th book and is published by Quadrille, my first book was published in 2000 with Ebury Press (Random House) and co-incidentally that is where I met Lisa Pendreigh this book's commissioning editor.

Hook Yarn and Crochet is one of four from Quadrille's 'simple makes' series. The book contains over 20 projects,  ranging from a jute holdall, which uses garden string that I bought in a pound shop, to a mercerised cotton daisy and leaf garland inspired by last Summer's holiday in Cornwall where my daughters and I made daisy chains. The book begins with basic instructions so that a beginner could pick it up and teach her/himself to crochet from scratch.

I had always wanted to write a crochet book, despite training as a knitwear designer I was taught to crochet before I could knit and have always loved the versatility of the craft. Over the years crochet has popped up  in my commissions wherever I could fit it in, from making a dolly bag for a Margaret Howell collection, a series of beanies for hat makers Fred Bare to crochet hats for menswear designer Duffer of St George.
I also include crochet projects in my general craft books and Little Badger has a few children's pieces in there too, including a cardigan  crocheted in cream cotton with navy tipping .
Since working on 'Little Badger Contemporary Classics'  Lisa and I have remained firm friends so I was thrilled when she asked me to pitch ideas for a whole book dedicated to crochet. When we compared notes about project ideas we were very much thinking along the same lines so the book went ahead.

I really like all of the projects and was keen to design a selection that would have a broad appeal..... It's hard to choose a favourite but if I had to it would be between the garlands, wrist warmers or snowflakes.
The ethos behind the book was that readers should really want to make everything. I find it frustrating when one picks up a book and there are only 1 or 2 great ideas as it doesn't offer value for money. With that in mind I have tried to design stylish everyday pieces for the home,  things to wear and practical makes too and I truly hope that my readers will be pleased with the results.

Over the years I have had a number of studios from Shoreditch ( in the late 80's early 90's, when it really was a no mans land,) to the Oxo Tower, Clerkenwell and Clapham.  Recently I have had to leave my studio as the building is being re-devloped so I am working from home at the moment........not ideal...... Tidying up at the end of each day is very irritating for a crafter and working on different projects at the same time means that my current space can only be described as chaotic.  My husband is also self employed and we share a  house in SE London so we have decided to convert the attic into a studio space where we can both work and where I can leave my sewing machine, fabrics and yarn out without worrying about the mess.

I was taught to sew as soon as I started playing with dolls as I wanted to make their clothes. My grandmother taught me to crochet when I was eight and I knew that I wanted to go to art school from a very early age, art and domestic science were my favourite subjects at school. When I found out that I could move to a foundation course at 16 and take A levels at my local art college I was in heaven, I don't know if that is still possible, but it was perfect for someone like me.   I was at St Helens college of art just outside Liverpool for two years from aged 16-18, and where I spent my days trying out everything arty from screen printing and photography to embroidery. life drawing and ceramics, it was bliss, from there I was accepted at Chelsea on the textile course.

The first thing I made was a doll's skirt, one wonky seam with a draw string waist, lots of doll's clothes followed and anything I saw on Blue Peter I tried to replicate, the first of which was a padded jewel box which my Mum still has.
After my Grandmother taught me to crochet I  made a blanket for my dolly's cot which I still have it, it's oval, which is probably accidental! and it's rather wavy in parts, the colours change part way through some of the rows as I used up scraps from the wool bag but it is testament to her patience & my determination to learn, I even remember taking it to school to work on at lunchtime.

Old knitting and crochet patterns are a huge inspiration and I use my extensive archive collection as the starting point on most jobs.  Sadly I don't know who the designers are as they didn't ever receive credits.
The Bloomsbury group are also heroes, particularly their textiles and the paintings at Charlston house in Sussex always inspire too. The Omega group were an amazing collective of designers and painters as well as writers. I have a number of books about them and recently found a tapestry book that has all the patterns in it for the cushions and covers.
Debbie Bliss and Erika Knight are incredibly talented knitwear designers and the old school knits from Joseph Tricot are works of art.  Martin Storey always designs brilliantly, particularly his menswear,  I always keep an eye out for his books.
Recently I have been reading blogs, too numerous to mention, but Jazz Domino Holly stands out, I love her rock 'n roll attitude to craft, she reminds me of myself twenty plus years ago.

Mostly in nature, my family and I go on holiday twice a year to the same place in Cornwall, the landscape is amazing, particularly changing colours of the sea, the natural coloured tones of the rocks and the limes and ochres of the many lichens that grow there.
I am also an avid visitor to outdoor antique markets like Sunbury , Ardingly and Shepton Mallet or to French brocantes when I get the chance. I find it impossible to pass a car boot sale without dropping in and I have found many a woollen treasure that way over the years. I collect vintage clothes and I am particularly attracted to woven and printed patterns and will buy something even if the garment is too worn to wear simply for the pattern.

Having  recently re launched my children's clothes company Little Badger I am finding that is taking up most of my time. I also have another book being published on September 2nd 'Simple Knitting' with Mitchell Beazley (Octopus Books) so I am working on press for that too. I am about to start a monthly craft column for Saga magazine....for the over 50's...of which I am one! and I have a further book proposal with Quadrille, this time it's a sewing book, I am very much hoping that it will get the green light for next year and keep me as busy as I have been in 2013.

Crochet is now just as popular as it was in its seventies heyday. The endless versatility of this yarn craft, coupled with the fact that the only equipment you need is a basic hook, means that crochet is gaining fans of all ages. The latest book in the popular Simple Makes series, Hook, Yarn And Crochet is a collection of 20 simple but adorable crocheted projects. The garland of sweet crocheted daisies brings a touch of the meadow into your home, whilst the hanging heart is the perfect love token to present to your beau. A lampshade decorated with dangling autumn leaves and a unique crocheted clock will light up any interior.

October 5th, 2013
Thanks so much for my book! Really cheered me up
Reply