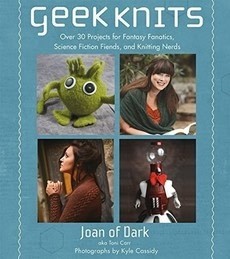 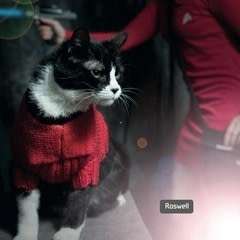 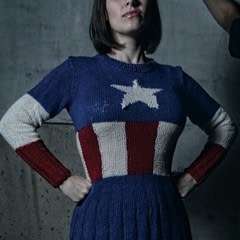 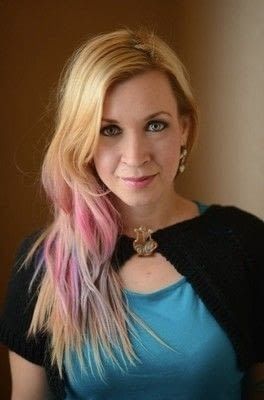 I really wanted a wide range of projects. For me, it's important to offer complex projects (Such as the Muggle Artifact Sweater) for knitters that really love to take on a challenge, while not forgetting about knitters that pick up the needles to relax! Which is why there are easier projects available like the Dragon Rider Shrug or Time Traveler Socks.

I love making geeky things, so of course I want to share that love! I had the idea that it would be really fun to get geek celebrities to do the modeling. I wanted it to not only be a knitting book, but also something that could be displayed on a coffee table and fun for non-knitters to look at as well. (And maybe inspire them to start knitting!)

Can I say every project? Because I really do love them all. There were some that had great stories behind them, such as getting permission to call our vampire bunny "Bunnicula". I really wanted it to be in the book but I also really wanted the authors permission. Unfortunately he didn't have any sort of online presence at the time! I finally asked my agent for advice and it turned out that HIS agent was just a couple of desks over! So she asked him and in about 5 minutes I had a very enthusiastic "Yes!".

It would cause a neat freak to hyperventilate! There is an absolutely obscene amount of yarn. I have wall to wall cube storage stuffed with yarn, creepy mannequins modeling more than one outfit at a time, and usually one or two forgotten mugs of coffee on my desk. Sketch pads, gauge swatches, a spinning wheel and hundreds of pairs of needles take up just about every available space.

Yes. At least, when I was a kid I had an imaginary flying unicorn named Gallada that told me I was.

I would have been really young. We used to spend a lot of time with my Grandma, and she had all these old crafting magazines with the most insane, sometimes downright creepy projects. Like, "Make a cheerful clown with an old toilet paper roll!" and then I would have clown nightmares for a week.
I picked up knitting a few times when I was a kid, until I made the mistake of taking it to Girl Scout camp and getting called "Grandma" by all the kids for the entire week. I didn't start again until college. My Grandma lived out in the country by herself and being deaf, didn't get a lot of opportunity to socialize. Knitting was a good way for us to spend time together without a language barrier. Plus she would give me cookies and pick up my dropped stitches for me!

It's so hard for me to pick a favorite author! I've got a lot of love for sci-fi and fantasy, so of course John Scalzi, Peter S. Beagle, Neil Gaiman and George R.R. Martin make the cut. I read a lot of YA, and really enjoy Maureen Johnson, Melissa Marr and John Green.
I also have a deep appreciation for Paul Auster. I've read and re-read his books until they have literally fallen apart in my hands! It's my dream to get a picture of him in a sweater some day!

I think every girl or guy who attempts crafting is a hero! This stuff can be hard!

Everything inspires me. I look at my parrot and want to make her a hat. (Note, don't try this at home. Parrot + hats doesn't tend to end well) I read books or watch movies and tv and end up pausing things to run to the craft store to attempt to make the things that I see or read. Recently I was inspired by a spider named Emily to make fuzzy rainbow leg warmers. (Emily the spider is a resident of photographer Kyle Cassidy's front porch. http://kylecassidy.livejournal.com/

Right now I'm promoting Geek Knits. I'm hitting conventions where I talk, sign books and host knitting groups (I'll even teach you to knit if you need me to!) and I'm doing some scattered book signings around the mid-west.

There are also... plans. Plans that might involve more celebrities. And more sweaters. Speaking of which, does anyone have Paul Austers' number?

Are you ready to embrace your inner geek? This fun and fashionable compendium of knitting patterns definitely leans toward the Dark Side--but who says the Dark Side can't be chic and colorful, too? With projects ranging from easy to advanced, there's something here for everyone: sci-fi geeks, dice rollers, and fantasy enthusiasts alike. And if you're less into the culture and just need something unique to hold your comic book collection, author Joan of Dark has that covered, too.

Whether you consider yourself aligned with the Chaotic Good or take a more Neutral Evil approach to life (and knitting), Geek Knits has everything you need to dress the part.