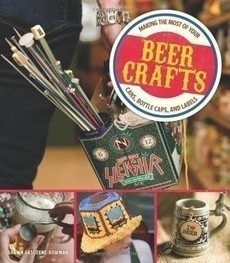 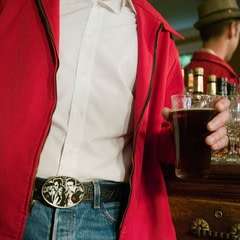 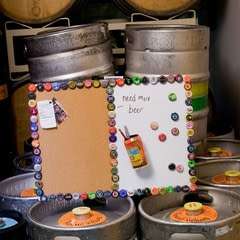 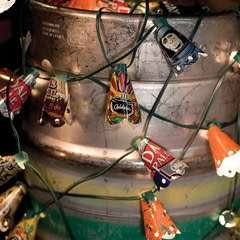 A synthesis of two outstanding hobbies — making things and drinking — Beer Crafts is the answer to the age-old question of what to do with those 99 bottles of beer on the wall.

While author and crafter extraordinaire Shawn Bowman would like to think she came up with the idea on her own, inspiration really came from her eight-year-old daughter, who spent a summer obsessed with making jewelry out of her parents' discarded bottle caps. Finding the note on her desk, “My crafting involves you to open a beer,” the author had what can only be called an epiphany: “ALL crafting should involve me opening a beer.” She raised her daughter’s allowance, and set down to writing this book. But first, she opened a beer.

Beer Crafts shows you how to repurpose not just the caps but also labels, bottles, and even cans into useful, hip, and quirky items — from attention-getting (if not downright sexy) garter belts to the classic crochet beer can hat, to beer bottle tags, to refrigerator magnets, and more. The projects are super fun, easy to make (even for a first-time crafter), and most of the supplies are things you probably already have on hand or chilling in the fridge.

Beer Crafts has jewelry and accessories for guys and gals. From cowboy hats made from beer case boxes and masculine bottle label belt buckles and wallets to flowery bottle top flip-flops and cute-as-a-button beer cap headbands, there’s a little something for everyone — even beer can jackets for the family dog! Beer bottles themselves get dressed up with insulating crochet cozies and fancy charm necklaces, ending all arguments over whose drink is whose, when they’re all clearly marked “mine”! There are even funky home decor projects, including candle holders, patio lanterns, bird feeders, and a memo board. And with plenty of beer quotes and trivia, Beer Crafts is recommended bar reading for those who don't craft.

Tie one on — then braid it, glue it, and embellish it — with Beer Crafts.