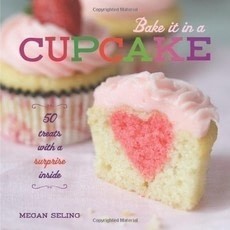 Bake It in a Cupcake 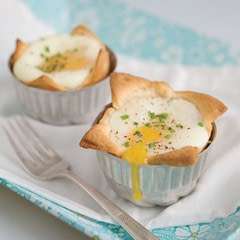 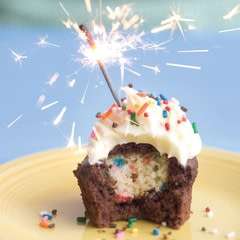 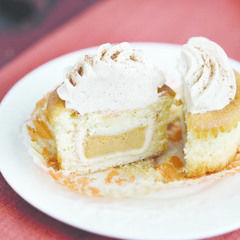 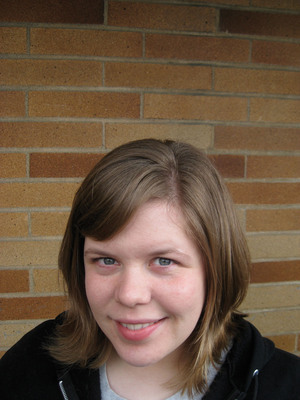 My name is Megan Seling and I am the creator of BakeItinaCake.com, a blog dedicated to cake, cupcakes, and all the delicious things you can bake inside of them! In October 2012 I released my first cookbook, Bake It in a Cupcake. It's available now on Andrews McMeel Publishing. (And I'm biased, but it's really cute.)

Every cupcake recipe in the book has something hidden inside—from a mini pie to a hunk of baklava. There are recipes with pieces of candy bars hidden inside, snickerdoodle cookies, lemon bars, and even a cupcake made out of pixie sticks! Some of them require a little extra work, of course, because you have to not only make the cupcakes, but also what goes inside the cupcake, but the outcome is so delicious that it's worth the effort (I think so, anyway). And, because I'm by no means a professional baker, I appreciate a good shortcut, so I give tips along the way of how you can either substitute one ingredient for another in order to save time, or split up the workload so you don't have to dedicate an entire afternoon to baking.

There are a few savory recipes, too! The croissant egg cups and brie cheese-stuffed apricots baked into corn muffins are two of my favorites. They're especially good for breakfast.

The first time I baked something into a cupcake, it was sort of a fluke/last-minute experiment. I was going to a friend's house for a birthday party, and her husband always makes really cool cakes (guitar-shaped, Star Wars inspired, etc...) so I wanted to make a cupcake that was more impressive than just your average cupcake. All the Easter candy was on clearance, so I got a bunch of those mini Cadbury Creme eggs, originally to go on top of the cupcakes, but when I got home, as I was mixing everything together, I wondered what would happen if I put the Cadbury Eggs inside. So I tried it, and it worked! That made me wonder what else I could bake into cupcakes, so I started experimenting with other things—mini cherry pies, caramelized pineapple, cookies. I started posting pictures of what I baked on a Tumblr blog and it got pretty popular pretty quickly (thanks to CakeSpy, who has been a supporter since day one). It was just supposed to be a photo blog, tracking my baking adventures, but people started asking for the recipes. That inspired me to take it a bit more seriously, to start baking things from scratch, and create my own cupcake recipe. After about a year I had ammassed quite a collection of recipes and people started suggesting I put them together into a book, so I did! It's been a really amazing experience, even more so knowing it kind of happened by accident.

I'd have to say the Pumpkin Pie-Filled Cream Cheese Cupcakes. I make those every year for Thanksgiving. They're my favorite. I'm a pumpkin pie fanatic, and when you bake a mini pumpkin pie into a cupcake, it makes for a creamy, delicious center, and the crust is just slightly salty. SO GOOD. I'll even bake those in the summer—why wait for the fall for something so delicious?

My husband and I have a one-bedroom apartment in Seattle and we lucked out because the kitchen was redone right before we moved in. For the first time since moving out of my parent's house, I have an oven that actually has a working thermostat! My kitchen is pretty basic, except for the fact that there are half-used bags of candy, bottles of sprinkles, and about a million cupcake wrappers tucked into every possible spot. I have a KitchenAid mixer that I got over 10 years ago as a Christmas gift from my parents. That mixer has really put up with a lot!

My writing space is usually my couch or a coffeeshop. I like to write at home, but there's almost always a fat orange cat fighting for a spot on my keyboard, so when I really have to concentrate I have to pack up and take my laptop to a nearby coffeeshop to get any work done. Thankfully, I really like coffee.

I think so, yeah. My parents always encouraged my sister and I to be creative—we had a lot of art supplies and stamps and stickers. And I come from a family of bakers. All amateur, but really great. I remember baking and decorating cookies since I was really, really young. I always asked for an EasyBake Oven, but never got one, and I was so sad about it until I finally got old enough to realize that I don't need an EasyBake Oven, since my parents let my sister and I use the real oven to bake things.

My sister and I used to invent our own recipes, too. We'd take whatever we could find in the cupboards, stir it together into a bowl, and microwave it. We ruined a lot of bowls that way. Caramel, marshmallow, chocolate, nuts—it all turns into cement when microwaved on high for five minutes. None of those recipes are in the book (thankfully).

I remember when I was really young—maybe five—and I discovered the magic of making my own crayons. My mom took all the bits of broken crayons that my sister and I had since ignored, and she put them into muffin tins and melted them in the oven to make new, rainbow crayon pucks. I was AMAZED. I never knew that could be done!

I also remember I had to go to Sunday School one summer, and they had us glue cotton balls onto sheep-shaped pieces of paper. They told us to only put the cotton on one side, and I got so frustrated because I wanted my sheep to have cotton on both sides because, duh, sheep don't have hair on only one side! Sunday School and I did not get along.

Right now I love, love, love Christina Tosi, the pastry chef at Momofuku Milk Bar in New York. Her cookbook is incredible. She's super adventurous, and I love that. Her cookbook is a bit intimidating—she makes everything by hand (even the sprinkles), but it's amazing. Lily Vanilli is another favorite. Her book is gorgeous—seafoam green cover, bright pink pages. She covers her desserts in fruit and broken pieces of sugar candy and nuts and flowers. Everything looks beautiful, but in a kind of chaotic way. I like it when people break the rules, or at least bend them a little, and both of those women like to take chances.

Everywhere, really. I can wander around the grocery store for a long time, trying to piece together recipes—getting inspiration in the seasonal produce or the candy aisles. I love visiting other bakeries, too. I'll look at their flavor combinations and then start thinking about what my own interpretation of that could be. My friends and are a really great source for ideas, too. Sometimes they'll request something in particular—something that involves their favorite flavor or favorite candy bar—and I'll run with that. One of my favorite recipes, the Whatchamacallit brownies (http://bakeitinacake.com/recipes/whatchmacallitbrownie), came about that way. My friend Patty LOVES Whatchamacallits and she requested they be baked into something for her birthday. I've made them at least a dozen times since. They're SO GOOD! And super easy, too.

I've also done desserts that relate to the weather (like these Rainy Day cupcakes, http://bakeitinacake.com/post/3446888466/rainy-day-cupcakes-i-couldnt-bake-real-rain-into) and hockey. I love hockey (go Nashville!) so I made some Stanley Cup Cakes during the playoffs last year (http://bakeitinacake.com/recipes/stanleycupcakes).

More cupcakes! I'm always trying to create new flavors and treats. I have a few fun Valentine's Day ideas coming up, which I will post on my blog, bakeitinacake.com. I'm also starting to think about what my next book could be--I had a lot of fun doing the first one, and I really love to write, so I'd love to do another. Thankfully you can never run out of things to bake into other things.

Bake It in a Cupcaketakes the cupcake craze to the next level, operating on the logical assumption that the only thing better than a delicious cupcake is one with a sweet or savory treat—mini pie, fruit, chocolate kiss, breakfast cereal, baklava, cheese, even egg—hidden inside it. As the saying goes, it’s what's on the inside that counts.

Based on Megan Seling's popular blog Bake it in a Cake (www.bakeitinacake.com),Bake It in a Cupcake includes 50 recipes—many accompanied by color photographs and step-by-step instructions so that even inexperienced bakers will find it easy to make these fun, eye-catching, and unique desserts. Recipes are organized into chapters by what's inside, whether that's another baked good, fruit, or your favorite candy.

"It's a fact: Bake It in a Cupcake is stuffed with awesome, over-the-top deliciousness. Brimming with fun and decadent recipes, it's an essential volume for the adventurous baker, and bound to garner a cultlike following of enthusiastic tasters." — Jessie Oleson of CakeSpy.com

"The cupcake is my oldest friend and arguably the love of my life. (Sorry, Terry.) I didn't think the cupcake could be improved, but Megan Seling has done it. Her pumpkin pie–filled cupcake is possibly the best cupcake I've ever eaten. I've sampled several dozen of Megan's stuffed cupcakes—each a delicious work of art and a mind-boggling feat of engineering—and now it's your turn. Prepare to have your mind and your taste buds blown—along with any preconceived notions you may have had about what a cupcake can be." — Dan Savage, author of Savage Love, creator of the “It Gets Better” Project, consumer of cupcakes

"As someone who has disliked everything about cupcakes except eating them, I finally have been broken–and have surrendered to the awesomeness of the Cupcake Age–by Megan Seling's Bake It in a Cupcake. If you even remotely care about having fun in the kitchen, eating tasty tidbits, and awakening the creative monster within us all, then this book is for you. And it’s mandatory for parents!"— Andrew Zimmern, chef, author, and host of Travel Channel's Bizarre Foods