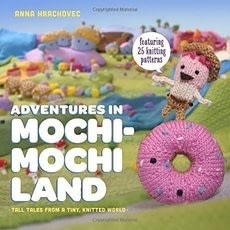 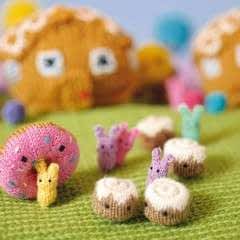 I’m a knitter obsessed with making a world of cute and slightly weird characters, called Mochimochi Land. It’s become an all-encompassing project for me for the past eight years or so; it started with making patterns, then expanded to soft sculptures and installations, and now animations and books. A big part of the fun is seeing what other knitters do with my patterns—I get so much inspiration from the creative modifications they do and the stories that they tell.

Adventures in Mochimochi Land is a combination storybook and pattern book, which is a first for me! More than half of the book is devoted to three immersive stories that take place in Mochimochi Land—there’s a donut that tries to eat a town, a community of sea creatures who hold and election, and a balloon who falls in love with a blimp. The rest of the book comprises 25 knitting patterns to make the characters and props in the stories! Most of the patterns are for miniature knits, from tiny bakers and lollipops to dolphins and crabs to balloons and clouds.

I’ve always wanted to write a storybook, at least from the time that I was in high school, but I just didn’t think it was something I would ever get to do. But since the time I started Mochimochi Land a few years back, I was naturally making up stories about my characters and presenting them in different ways. I was just very lucky that when I mentioned the idea of little stories to my editor, she went for it! Originally I was thinking more like dioramas and fun descriptions that went with them, but she encouraged me to think big and come up with full narratives that would play out over multiple pages. The specific ideas for the stories came out of thinking of different environments within Mochimochi Land that I hadn’t explored so much yet—a candy land, under the sea, and up in the air—so I thought up what kinds of characters would inhabit those realms, and I had fun coming up with silly stories to take place in them!

Hmmm, this is always an impossible question to answer, but I am pretty in love with the little mallow bunnies. They’re like miniature marshmallow bunnies and they’re so quick to make (in less than 10 minutes), they can really multiply on your needles!

I have a little niche in my apartment that’s my workspace, with a desk and bins full of yarn and needles and other materials like felt and plastic eyeballs. It’s almost always messy, because I’m always working with lots of different yarns and it just doesn’t make sense to constantly put everything away. You can often find me there working and listening to podcasts, and looking out my window that faces my quiet street in Chicago.

I’d say yes, some of my earliest memories are making displays with my stuffed animals, which really isn’t so different from what I do now! When I was in middle school I got into making figures with Sculpy, and that’s when I discovered that I loved working in 3D. But it took me many more years to figure out that I could make my own stuffed animals through knitting.

I usually hated the craft projects that they made us do in school—it was just so boring to follow directions and end up with something that looked like what everybody else was making. I really didn’t get into crafting until I took up knitting, which was when I was an exchange student living in Japan. My host sister had just learned to knit from her friend, and she came home and taught me the basic stitches. My first project was a purple fun fur scarf and I LOVED it.

I don’t keep up with many crafts aside from knitting, but some of my favorite knitters are Lorna and Jill Watt of Knits For Life (http://knitsforlife.com), Deadly Knitshade (AKA Lauren O’Farrell) (http://www.whodunnknit.com), and Franklin Habit (http://the-panopticon.blogspot.com). I should also mention Jenny Hart of Sublime Stitching (http://sublimestitching.com)—I took an embroidery class with her about ten years ago, and although I haven’t done much embroidery since, she really inspired me to try starting my own website for my knits.

I get inspiration from classic cartoons, video games, fairy tales and urban myths, and many artists who are creating worlds full of characters, from Dr. Seuss to Friends With You. I take a lot of inspiration from Japanese characters like Kogepan, Totoro, and all the weird cousins in Katamari Damacy.

I'm working on new designs for future characters, and I have a new short animation in the works too!

What do a talking doughnut, a crabby politician, and a lovelorn balloon have in common? They're all citizens of the candy-colored knitted world known as Mochimochi Land. Adventures in Mochimochi Land started out as a collection of tiny knitted characters, but as the patterns grew they needed an entire world of their own, complete with knitted cities, knitted forests, knitted oceans, and most important, knitted friends! The book follows the adventures of a tiny knitted explorer, as he travels this unbelievably cute world and uncovers its strange yarn-based origins. For intrepid knitters, the book also includes a section with 25 all-new patterns for the characters and props used in the stories. The patterns use small amounts of yarn and beginner-friendly knitting skills and knit up quickly for instant fun.