I'm moving more and more towards sewing primarily for dolls lately, and I really want to start sewing for Blythe dolls and some of the popular sizes of BJDs, since collectors seem to be much more willing to pay me reasonable prices for my work. (and since I've been trying rather unsuccessfully to save up for a Blythe or a BJD of my own for the last 4 or 5 years, I *really* need to be able to start charging what I'm worth instead of just what people are willing to pay!) The trouble with that is that these are even smaller than the 18" dolls I initially started my doll sewing for, so finding embellishments/ finishings in the right scale is even MORE difficult than it was for my bigger dolls! I've talked to people in some of the Facebook groups I'm in for various doll collecting, and got a really helpful link to an ebay shop from someone in a Living Dead Dolls group, but there's one thing that's still evading most of my searches...**Buttons**!

I know most people probably just substitute beads for buttons when the doll is that small, but I can be a little obsessive about realism and accuracy in my designs. If I'm going to all the trouble of designing a perfect scaled-down couture boutique dress, I don't want to half-ass my finishings. So I guess what I'm wondering is does anyone else sew for dolls who might have a source for tiny buttons? Or even any other miniature embellishments? (lace trims, tiny snaps/ hooks & eyes, even tiny jewelry-making supplies would be greatly appreciated!) Or a site that sells a good variety of mini print fabrics? Most of them that I'm finding only seem to stock florals, which I have never been a fan of and generally try to avoid like the plague.

Pics included of some things I've made in case anyone wants an idea of the kinds of things I'm interested in sewing. Generally speaking, I tend to favor a very dark style (both in terms of colors, and in that I use a lot of goth style elements in even my "everyday" designs), lots of costume-y pieces and vintage silhouettes. Feminine, but not "girly," if that makes any sense. 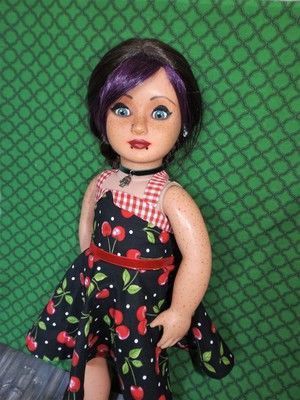 It won't let me post any more pics right now. :/ I can try again later though if anyone wants to see more.

you could probably make one out of clay to your standards then use it to cast more...

If I were anybody else, I would definitely try that! But I have this magical ability where any time I try to sculpt things, they come out terrible. I actually got the only "pity A" I've ever had in my life when I tried to take a sculpting class in high school. I think it was the only pity grade that teacher ever gave out, but I was honestly *that* bad.

Maybe I could find someone else to sculpt some for me though.

you would only need a small button and some clay to press it into, then after the clay dries you use it as a mold to press more clay into. no sculpting required!

Make moulds for tiny buttons in siligum, using the heads of small nails, bolts, end of paintbrush , pens or crochet hooks etc. that are the size you want.
For tiny print fabrics, source or draw the design you want then print your own onto printable cotton, if your dolls are small, a letter size sheet prints enough for a small dress.
You can also print out your design onto transfer paper (TAP for best results) and iron onto plain cotton.
If you come up with a unique design for fabric, and you would like it to be a signature design for your range, you can have it professionally printed by Spoonflower and many other craft fabric printers at a reasonable cost.

Maybe you could make buttons with shrinkadink plastic that could shrink down small enough. April's links are hopeful. I checked them out. --Best of luck to you.